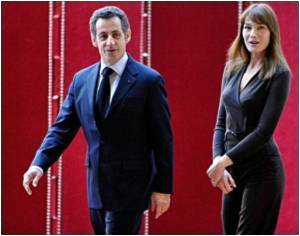 A leading dermatologist has claimed that overuse of botox has made Carla Bruni's beautiful face almost unrecognizable.

"Carla is over botoxed," Dr. Ben Behnam told RadarOnline after seeing pictures of the First Lady of France.

Botox is the trade name for a neurotoxin, Botulinum Toxin A, which is used for cosmetic purposes and also to treat various medical conditions
Advertisement

"She's had way too much done. That's why she has the surprised look on her face and looks like a chipmunk," RadarOnline quoted Dr Benham as saying.


He has not treated France's first lady but says that, in his opinion, she has had a lateral brow lift and fillers in her cheeks.

"She looks like she's had Radiesse which is a filler for wrinkle reduction. But her results do not look natural," he said.

Cosmetic surgeons can reshape your face and body with innovative techniques. Botox, face fillers, breast implants, rhinoplasty, liposuction, tummy tuck, vaginoplasty and hymenoplasty to name a few.
Advertisement
"A lot of celebrities these days look the same. They all have the puffy cheeks and cat like eyes

"What they should do is just do a little bit so it just makes them look like a younger version of themselves rather than a 50-year-old trying to look 25," he added.

The doctor gave some tips on some suitable treatments that would look more appropriate.

"A good treatment to get is Sculptra because it looks more natural and can make patients look pretty and attractive rather than that ridiculous fake look," he said.

A survey has found that first impressions have a profound influence on determining the future course of a relationship.
Advertisement
<< Sydney Welcomes New Year With Spectacular Fireworks
Yoga Can Provide Relief To Breast Cancer Survivors >>

Reversing The Ravages Of Time Through Rejuvenation