Overeating and sugar addiction is found to be due to a specific brain circuit. The reward-related neural circuit specifically controls compulsive sugar consumption in mice. The control of sugar consumption could be done without preventing the feeding necessary for survival. This experiment provides a novel target for the safe and effective treatment of compulsive overeating in humans.

Senior study author Kay Tye of the Massachusetts Institute of Technology said that although obesity and Type 2 diabetes were major problems, many treatments do not tackle the primary cause: unhealthy eating habits. Their findings were exciting as they raise the possibility of developing a treatment that could selectively curb compulsive overeating without altering healthy eating behavior.

Tye and her team suspected that a neural pathway from the lateral hypothalamus to the ventral tegmental area might play an important role in compulsive overeating because these brain regions have been implicated in reward-related behaviors such as eating, sexual activity, and drug addiction.


They used a technique called optogenetics. Activation of the pathway from the lateral hypothalamus to the ventral tegmental area caused well-fed mice to spend more time feeding and increased the number of times mice poked their nose into a port to receive a sugar reward, even when they had to cross a platform that delivered foot shocks to get to the reward. By contrast, inhibition of the same pathway reduced this compulsive sugar-seeking behavior without decreasing food consumption in hungry mice, suggesting that different neural circuits control feeding in hungry animals.

According to Tye, it makes sense that brain circuits evolved to support binging on scarce, sugary foods whenever these valuable sources of energy become transiently available during certain seasons. But in the winter, it might be adaptive for separate neural circuits to drive hungry animals to eat whatever type of food is available but to consume less overall to ration out limited resources. 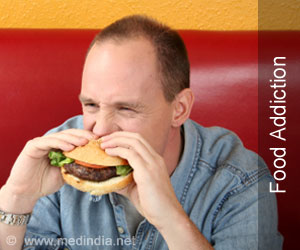 Excessive Sugar-Sweetened Beverage Consumption Among Children
An alarming increase in the number of children affected by obesity has become a cause of concern. Read on to find out how drinking sweetened beverages contribute to this early obesity.
READ MORE