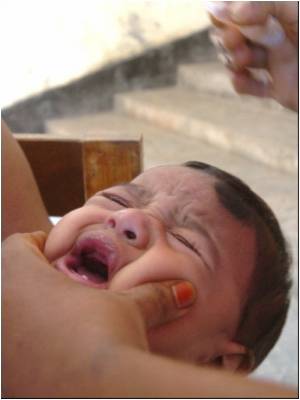 There could be overdose problems with domestic spoons used to dispense children's medicine, experts warn. The size, though apparently similar, could actually vary - some of these spoons  hold two to three times as much as others.

The study in the August issue of IJCP, the International Journal of Clinical Practice, looked at 71 teaspoons and 49 tablespoons collected from 25 households in Attica, Greece.

The US FDA has released drug dosage guidance as part of its Safe Use Initiative, intended to help both patients and caregivers.
Advertisement


"The variations between the domestic spoon sizes was considerable and in some case bore no relation to the proper calibrated spoons included in many commercially available children's medicines" says Professor Matthew E Falagas, Director of the Alfa Institute of Biomedical Sciences in Athens, Greece.

Researchers say consuming liquid medicine using a kitchen spoon might prove to be either ineffective or dangerous.
Advertisement
"A parent using one of the biggest domestic teaspoons would be giving their child 192 per cent more medicine than a parent using the smallest teaspoon and the difference was 100 per cent for the tablespoons. This increases the chance of a child receiving an overdose or indeed too little medication."

"We not only found wide variations between households, we also found considerable differences within households" says Professor Falagas.

The researchers were also keen to see whether there were any differences when five of the women were asked to dispense liquid from a calibrated 5ml medicine spoon. They found that only one dispensed the correct dose of liquid, with three dispensing 4.8ml and one 4.9ml.

As a result of their findings, the researchers, from Athens and Boston, USA, are urging parents to use calibrated medicine syringes to dispense liquid medication to children. This method is also more effective if children are very young or reluctant to take medicine, as a spoon can be pushed away and spilt, leaving the parent unsure about how much the child has actually taken.

"Dosing and administering medication to children is different from adults" says Professor Falagas. "Paediatric dosages need to be adjusted to age and body weight and, as a result, children are considered to be more vulnerable to dosage errors than adults.

"Our research clearly shows that using domestic teaspoons and tablespoons can result in children receiving considerably more or less medicine than they need.

"Low-cost medicine syringes are widely available from pharmacists, very easy to use and will give parents greater confidence that they have dispensed the correct dose."

The authors also suggest that adults avoid using domestic spoons for themselves.

"Although adults do not face the same risk levels as children, we would still advise them to use properly calibrated spoons or cups if they take any liquid medicine."