Over-Nutrition in Infancy Could Lead to Adult Obesity: Study 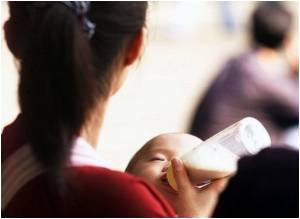 A study has found that bottle-fed babies are primed for a life of obesity.

Babies who gain pounds too fast in their first months are more likely to become fat.

Nutritional Assessment Calculator helps to find out if you child is undernourished or malnourished.
Advertisement

For the first time, scientists believe they have found a link between babies' weight gain and their risk of obesity later in life, reports the Daily Express.


And the results suggest that breast is still best if you want your child to be slim.

The study by a team at University College London Institute of Child Health believe their findings have important implications for babies fed formula milk as they tend to put on weight more quickly than breast-fed babies.

Are you health conscious? If yes, go ahead to find out your approximate daily calorie requirement, which varies depending on the lifestyle and activities. This calculator indicates an approximate calorie requirement for a person having a normal lifestyle.
Advertisement
This is because formula milk is made from cows' milk, which is much more energy dense than human milk.

Researchers found that babies who were small at birth and were fed enriched formula milk gained weight at an accelerated rate. By the time they were between five and eight years old, their body mass was 22 to 38 per cent greater than babies who had been fed standard formula.

As part of the study, babies were given either standard formula milk or a formula with extra protein, energy-boosters, vitamins and minerals. The findings confirm previous estimates that suggest 20 per cent of adult obesity may be caused by over-nutrition in infancy.

The importance of eating food and the physiological, psychological and social functions of food.
Advertisement
<< Health Cover for 9/11 Rescuers Approved
Overeating and Obesity - a Vicious Cycle >>