Over 1,000 Participate in Health Awareness Camp in Mumbai 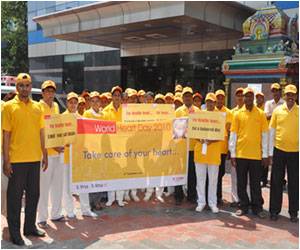 Following the rise in the number of lifestyle diseases and lack of awareness about it among them, over a thousand Mumbaikars participated in a health awareness camp organised by a city hospital.

The awareness camp was organised following a recent study by the national capital's prestigious All India Institute of Medical Sciences that found over 40 percent of adults living in cities suffering from several life style diseases arthritis, atherosclerosis, asthma and Type 2 diseases.

The members of the Connecticut Sikh Association along with the American Heart Association, organized a fundraising walk to create awareness about heart health.
Advertisement
‘To keep a track on the rise in number of life style diseases among people, Mumbaikars participated in a health awareness camp organised by a city hospital.’

According to the health ministry, India is home to nearly 62 million diabetics - second only to China. During the event, doctors from the Wockhardt Hospitals, the organisers, conducted several test and informed about the side affects of junk foods on which most of the city people rely.


"Due to change in life style, people do not realise what they are doing to their body. However, we have been conducting such health camps to keep a track on the rise in number of life style diseases among people," said Zahabiya Khorakiwala, managing director, Wockhardt Hospitals. In a bid to Amake the campaign successful, the hospital has joined hands with Bollywood actor Shilpa Shetty Kundra on promoting healthy habits.

A marathon under the banner 'Run For Your Heart' was recently held in Imphal to speard awareness about the functions of the heart and common heart problems.
Advertisement
"Health refers to a state of complete mental, physical, and social well-being, and not just in absence of infirmity or diseases. Wockhardt Hospitals being a healthcare service provider is very active in supporting other health initiatives and spread the awareness to people to engage more in outdoor activities, eat healthy, live healthy, be fit," said Khorakiwala.

The bollywood actress Deepika Padukone, in the year 2015, is planning to create as much mental health awareness among people as she can.
Advertisement
<< First Dutch Graphic Novel Reveals Life With Disabled Mum
Rising Sea-Levels May Make Days Longer >>

A multi-city walk for health will be organised in 11 cities in India by a health care provider for people of all age groups in order to create awareness and instil the walking habit.

Health Insurance - India
News Archive
News Resource
Advertisement
News Category
Milestone In Voluntary Blood Donation Achieved Samsung Reinvents Toilet for the Poor Which is a Better Form of Exercise: Daily or Weekly? First Phase of Foot-and-Mouth Disease Vaccination Shocking News: Polio Cases Return After a Decade in the US
More News
Sign up for Wellness Consult a Doctor Sign up for Selfcare

Daily Calorie Requirements Vent Forte (Theophylline) Iron Intake Calculator Noscaphene (Noscapine) The Essence of Yoga Calculate Ideal Weight for Infants How to Reduce School Bag Weight - Simple Tips Nutam (400mg) (Piracetam) Diaphragmatic Hernia Pregnancy Confirmation Calculator
This site uses cookies to deliver our services. By using our site, you acknowledge that you have read and understand our Cookie Policy, Privacy Policy, and our Terms of Use