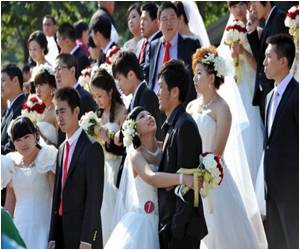 Men from across the globe are vying to bag the $65 million "marriage bounty" offered by a Hong Kong tycoon for the person who will tie the knot with his lesbian daughter.

Cecil Chao told the South China Morning Post newspaper that around 100 would-be suitors of his 33-year-old daughter, Gigi, had poured into his office since he went public with his offer on Wednesday.

"People send me letters, emails and faxes. I haven't had time to read them yet. I'll have to discuss it with Gigi," he was quoted as saying.


"There are some who said they don't want the money, only the chance to know my daughter."

One of the applicants, a Frenchman, wrote: "I'm really serious and (despite the fact) I am a man I think I can make this woman happy. I'm as soft as a woman."

Divorce can be traumatic for children and create a sense of insecurity amongst them. Couples should realize that joined parenting is important even after divorce.
Advertisement
Another appeared to offer a menage a trois: "I will win his daughter's heart and marry her, and my Maid Marian, a gorgeous Brazilian model, will help accomplish that with me."

Gigi has dismissed her father's behaviour and all the attention she is receiving as "seriously distracting".

"I am secretly praying for a blackout... so that I can get some peace and quiet," she said, as news of the marriage bounty spread through the world's media from Australia to India and the United States.

Chao announced the financial reward of HK$500 million after Gigi reportedly married her same-sex partner of seven years in France earlier this year.

"I don't mind whether he is rich or poor. The important thing is that he is generous and kind-hearted," 76-year-old Chao, a wealthy property developer, said earlier this week.

"Gigi is a very good woman with both talents and looks. She is devoted to her parents, is generous and does volunteer work," he added.

He denies that his daughter is gay or married, insisting she is still single and would make a good wife to the right man.

Same-sex marriages are not recognised in Hong Kong, a socially conservative Chinese city where homosexuality was decriminalised in 1991.

Chao is well known as a "playboy" in Hong Kong's social circles and regularly appears at public events with his latest young girlfriend.

He reportedly once claimed to have had intimate relations with 10,000 women.

Infidelity is no longer seen as a midlife crisis alone because younger people are beginning to cheat on their spouses
Advertisement
<< Presence of Diverse Community of Microbes in Healthy Lungs ...
Melatonin Supplements may Help Hypertensive Patients Taking... >>