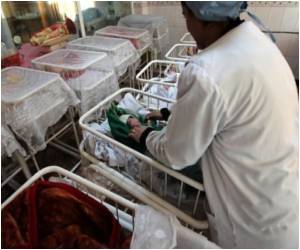 More than ten infants die in a government hospital in Tirupathi, Andhra Pradesh.

The infants died due to poor treatment and lack of medical infrastructure at of the S V R Ruia Government General Hospital.

Barely 10 and a Mother

In Mexico, a 10-year-old girl has delivered a child by caesarian section. The baby was delivered prematurely after a pregnancy lasting 31 weeks.
Advertisement

A relative of one of the victims, Subbamma, said that many parents had lost their children as they were not provided with medical treatment on time.


"Deaths occurred due to improper and delay in treatment. The doctors are saying that the parents and the attendants do not know anything about the treatment. More than 10 infants died," said Subbamma.

Expectant Mothers Suffering Cancer can Heave a Sigh of Relief

A recent insight may provide a sense of relief to expectant mothers who are victims of cancer and are undergoing chemotherapy.
Advertisement
Meanwhile, hospital superintendent Veeraswamy disagreed with the allegations levelled by the family members.

"Proper and right treatment was provided on time with proper supply of oxygen to all. Most of the babies were born due to premature delivery. They were underweight and there was no possibility of their survival. The condition of few of the babies was critical and they were on the deathbed," said Dr. Veeraswamy.

India's infant mortality rates show that 48 babies per 1,000 die within the first year of birth, compared to 17 in similar emerging economies like Brazil, or 16 in China, according to the World Health Organisation.

Many rural health centers are poorly maintained and run-down, with only the most basic equipment. There are not enough health workers, and there is a high level of absenteeism due to a lack of incentives and low salaries.

Despite India's rapid economic growth, its healthcare system has remained in the doldrums and is struggling with high rates of child and maternal deaths India accounts for a fifth of all newborn deaths from such preventable diseases as diarrhoea and pneumonia.

Women who conceive within six months after a miscarriage have a better chance of a healthy pregnancy without complications compared to women who wait longer, according to a study released Friday.
Advertisement
<< Autism Patient Denied Heart Transplant
EU to Consider Plain-packaging Law for Tobacco >>