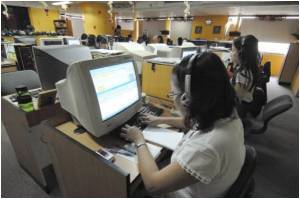 Outsourcing could be an easy way out for many US firms in these difficult times. But the flip side is dissatisfied and anxious workers could hurt the employer over the long term.

A worker's satisfaction with his or her job is important because it affects employee loyalty, efficiency in the workplace and quality of life, a new study confirms.


"We spend a great deal of our time at work, so it is an important part of our lives," says Dr. Martha Crowley, an assistant professor of sociology at North Carolina State University and lead author of a paper describing the research. "If our work experience is unpleasant, it affects every aspect of our lives and ultimately it affects our ability to do our jobs."


For their study, the researchers examined data on working conditions, workplace relationships and worker behavior of professional employees over the past 80 years. The researchers found that, over that period, employers have increasingly implemented measures that they feel will improve worker productivity and profits. These measures include layoffs, outsourcing jobs, replacing salaried employees with contract staff, and putting employees onto short-term teams designed to tackle individual projects.

"We found that, while these measures have succeeded in increasing performance pressure, there have also been unintended consequences," Crowley says.

Many of these unintended consequences have an immediate impact on employees. For example, professional workers increasingly confront a brutal work pace and as a result experience a great deal of stress on the job. Because projects and co-workers change fairly often, professional employees feel a greater sense of chaos at work. Other consequences include an increase in fear among employees that their job will disappear and a distrust of management.

The researchers also found a number of significant short-term and long-term ramifications for employers. For example, they found that professionals are less likely to help co-workers than in the past, because they are primarily interested in protecting their own jobs. Co-worker conflict hurts the efficiency and quality of the work product, since employees are less likely to work together effectively, while also contributing to a high level of stress among employees.

Researchers also found that these business practices have led people to withdraw loyalty from their employers. This could have long-term effects on employers, particularly once the economy turns around, since companies may face higher employee turnover or be forced to offer additional incentives to retain employees. Furthermore, the researchers found that employees are no longer as committed to their employers' goals. "People are still doing their jobs and many are putting in a lot of hours," Crowley says, "but they are not doing the things they would do if they were passionate about their work."

There may be a lesson here for employers. "Some firms have had a lot of success by handling their employees differently," Crowley says. "Treating your employees well can be a way to boost your profits and productivity simultaneously without generating the unintended consequences of tactics based on fear."

The paper also addresses the deterioration of working conditions in the manual employment sector.

The paper, "Neo-Taylorism at Work: Occupational Change in the Post-Fordist Era," was co-authored by Daniel Tope of Florida State University and Lindsey Chamberlain and Randy Hodson of Ohio State University. The research was done using data collected under a grant from the National Science Foundation. The paper will be published in the August issue of Social Problems.

US Economic Crisis Takes Toll on Mental Health
The murder suicide of a Los Angeles financial manager who shot dead five members of his family before shooting himself has highlighted the psychological toll of the economic meltdown.
READ MORE