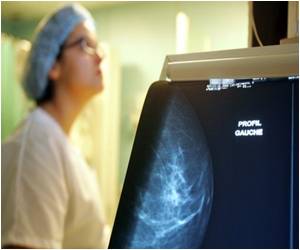 According to a report, a study that compared the benefits and harms of the frequency of screening mammography to age, breast density and postmenopausal use of hormone therapy (HT) suggests that woman ages 50 to 74 years who undergo biennial screenings have a similar risk of advanced-stage disease and a lower cumulative risk of false-positive results than those who get mammograms annually. The report was published Online First by JAMA Internal Medicine, a JAMA Network publication.

In 2009, the U.S. Preventive Services Task Force issues guidelines that biennial mammography, rather than the previously recommended mammography every one to two years, be performed for women ages 50 to 74, but the updated guidelines did not consider the influence of breast cancer risk factors beyond age, according to the study background.

Karla Kerlikowske, M.D., of the University of California, San Francisco, and colleagues sought to determine whether the benefits, such as early detection, and the harms, such as a false-positive mammography result or biopsy recommendation, differ among women undergoing screening mammography according to age, breast density and postmenopausal HT use.


Researchers analyzed data collected from January 1994 to December 2008 from mammography facilities in community practice that participate in the Breast Cancer Surveillance Consortium (BCSC) mammography registries. Data were collected from 11,474 women with breast cancer and 922,624 without breast cancer.
Advertisement
The authors found that biennial vs. annual mammography for women ages 50 to 74 was not associated with an increased risk of advanced-stage or large-size tumors regardless of a women's breast density or HT use. However, the results indicate that among women ages 40 to 49 years with extremely dense breasts, biennial mammography vs. annual was associated with an increased risk of advanced-stage cancer (odds ratio [OR], 1.89) and large tumors (OR, 2.39).

Study results also show that the cumulative probability of a false-positive mammography result was high among women undergoing annual mammography with extremely dense breasts who were either ages 40 to 49 years (65.5 percent) or used estrogen plus progestogen (65.8 percent) and was lower among women ages 50 to 74 years who underwent biennial or triennial mammography with scattered fibroglandular densities or fatty breasts.

"In conclusion, women aged 50 to 74 years, regardless of breast density or HT use, can undergo biennial rather than annual mammography because biennial screening does not increase the risk of presenting with advanced disease but does substantially reduce the cumulative risk of a false-positive mammography result and biopsy recommendation. Women aged 40 to 49 years with extremely dense breasts who choose to undergo mammography should consider annual screening to decrease the risk of advanced-stage disease but should be informed that annual screening leads to a high cumulative probability of a false-positive mammography result because of the additional screening examinations," the study concludes.

Male Breast Cancer
Most cases of male breast cancer are diagnosed between the ages of 60 and 70 years. Treatment of ......

Breast Lumps in Women - Symptom Evaluation
Most breast lumps are caused by hormonal changes in a woman and may not be cancerous. Keeping the th...

Breast Pain Symptom Evaluation
Breast pain is seen more commonly in women of the reproductive age group. The pain may vary in diffe...