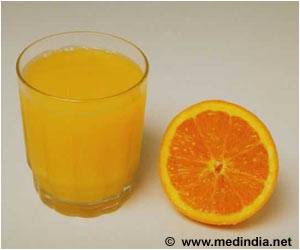 "The population is ageing rapidly across the world. Estimates suggest that the number of persons aged 60 or over could triple by 2,100. It's therefore imperative that we explore simple, cost-effective ways to improve cognitive function in old age," said study co-author Daniel Lamport.

The study saw a group of 37 healthy adults (mean age 67 years) consuming 500 ml of orange juice daily over an eight week period. At the beginning and end of the eight weeks their memory, reaction time and verbal fluency was measured.


These were then combined into one overall score known as 'global cognitive function'. The adults showed an eight percent overall improvement in global cognitive function after orange juice consumption compared to a control drink given during the study period.
Advertisement
Orange juice is a major source of flavonoids -- being particularly rich in a sub-class of flavonoids, known as flavanones.

Recent studies have shown that flavonoids may improve memory through the activation of signaling pathways in the hippocampus, a part of the brain that is associated with learning and memory.

This study is thought to be one of the first to show that regularly consuming orange juice flavanones could have a positive effect on older people's cognition.

"Small, easily administered changes to the daily diet, such as eating more flavonoid-rich fruits and vegetables, have the potential to substantially benefit brain health," Lamport said.

"This is an important discovery which strengthens the growing body of evidence that flavonoid rich foodstuffs could play a big role in tackling cognition decline in old age," he concluded.

Previous research has shown that other flavonoid rich foods such as blueberries are beneficial for cognition.

While the researchers are not recommending that people drink 500 ml of orange juice every day, they believe these findings show that the constituents of orange juice could play an important role in providing brain-boosting nutrients as part of a healthy, balanced diet.

The study was published in the American Journal of Clinical Nutrition.

Eating an Orange Better Than Drinking Orange Juice
Eating an orange is believed to be better than drinking orange juice, explained scientists in a new ...

Orange Juice can Keep Cancer Away
Oranges could prove to be crucial in cancer prevention, say researchers....