Oral Contraceptives Do Not Cause Weight Gain In Women 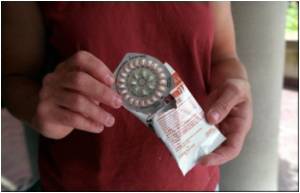 A new study has disproved the commonly held belief that birth control pills cause weight gain.

The study was conducted at the Oregon National Primate Research Center at Oregon Health and Science University.

"A simple Google search will reveal that contraceptives and the possibility that they may cause weight gain is a very highly debated topic," said Alison Edelman, a physician and researcher in the Department of Obstetrics and Gynecology at OHSU and lead author of the study.


"Issues surrounding weight are hard to study in humans, and the research thus far has been insufficient to demonstrate whether or not oral contraceptives cause weight gain or loss. But this is an extremely important question as concern about weight gain is one of the main reasons why women may avoid or discontinue birth control, which in turn places them at greater risk for an unplanned pregnancy."

Interesting information about the use of birth control pills, a debate about the birth control responsibility of men and women and development of hypothetical male contraceptive pill.
Advertisement
To conduct their research, scientists and physicians studied a group of rhesus macaque monkeys at the OHSU Oregon National Primate Research Center for almost a year. Rhesus monkeys were used in this study because their reproductive system is nearly identical to humans. However, unlike human studies, more variables can be controlled and measured - such as exact food intake - to provide more meaningful data.

At the beginning of the study, half the animals were obese and half were normal weight. During the eight-month treatment period, animals received doses of oral contraceptives, adjusted to the weight of the animals so that it mimicked dosage in humans. Researchers tracked weight, food intake, activity levels, body fat and lean muscle mass.

At the study's conclusion, the normal weight group remained weight stable whereas the obese group lost a significant amount of weight (8.5pc) and percent of body fat (12pc) due to an increase in basal metabolic rate. No changes were seen in food intake, activity or lean muscle mass for either group.

"This study suggests that worries about weight gain with pill use appear to be based more on fiction than on fact," said Judy Cameron, Ph.D., senior author of the paper and a researcher at the primate center.

"Additionally, there may be a differential affect depending on your starting weight - heavier individuals who keep their diet stable may see a weight loss with pill use. Most likely, the reason why this belief continues to exist is that the weight gain that seems to occur with age is being attributed to these medications. We realize that research in nonhuman primates cannot entirely dismiss the connection between contraceptives and weight gain in humans, but it strongly suggests that women should not be as worried as they previously were."

The findings are published online and will appear in next month's edition of the journal Human Reproduction.

Drug Side Effects Calculator Indian Medical Journals Diaphragmatic Hernia The Essence of Yoga Drug Interaction Checker Noscaphene (Noscapine) Hearing Loss Calculator Accident and Trauma Care Blood Donation - Recipients Iron Intake Calculator
This site uses cookies to deliver our services.By using our site, you acknowledge that you have read and understand our Cookie Policy, Privacy Policy, and our Terms of Use  Ok, Got it. Close
×