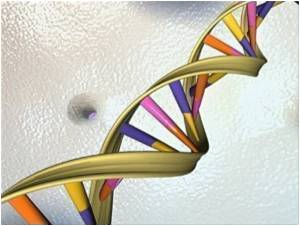 Light was used by Stanford University researchers to induce normal patterns of muscle contraction, in a study involving bioengineered mice whose nerve-cell surfaces are coated with special light-sensitive proteins.

The new approach allows scientists to more accurately reproduce muscle firing order, making it a valuable research tool. The investigators, from Stanford's Schools of Medicine and of Engineering, also believe this technique could someday spawn practical applications, from restoring movement to limbs paralyzed by stroke or spinal-cord or brain injury to countering spasticity caused by cerebral palsy.

The study, to be published online Sept. 26 in Nature Medicine, employed a technology known as optogenetics, which involves the insertion of a specialized gene derived from algae into the genomes of experimental animals. This gene encodes a light-sensitive protein that situates itself on nerve-cell surfaces. Particular wavelengths of light can trigger nerve activity in animals endowed with these proteins, modifying nerve cells' firing patterns at the experimenters' will.


"Our group's focus is on restoring optimal movement for people with physical disabilities," said one of the study's two senior authors, Scott Delp, PhD, a professor of bioengineering and the Clark Professor in the School of Engineering. "With optical stimulation, we were able to reproduce the natural firing order of motor-nerve fibers - an important step forward."

Encyclopedia section of medindia gives general info about Genetic counseling
Advertisement
Optogenetics was invented at Stanford by the study's other senior author, Karl Deisseroth, MD, PhD, associate professor of bioengineering and of psychiatry and behavioral science, who has used optogenetics in many experiments to conduct research on the central nervous system of freely moving animals. "This marks the first time the technique has been applied to the mammalian peripheral nervous system," Deisseroth said.

The peripheral nervous system includes the long nerve fibers that exit the spinal cord to innervate skeletal muscle, producing voluntary movement. Skeletal muscles work as aggregations of what physiologists call "motor units," each consisting of a single nerve fiber plus the muscle fibers it innervates. At various points along the motor nerve, individual fibers exit the nerve to make contact with a variable number of skeletal-muscle fibers.

Motor units come in a variety of sizes. Small ones have single, thin nerve fibers that innervate several muscle fibers, whereas the lone, thicker nerve fiber in a larger motor unit may innervate several thousand of them. Normally, when motion is initiated, it takes stronger stimulation to "fire" thick nerve fibers than thin ones. Thus, the smaller, so-called "slow-twitch" muscle fibers start contracting before larger "fast-twitch" fibers.

Fast-twitch fibers are essential for powerful athletic motions such as running, but fatigue quickly as they burn through finite stores of their primary fuel, glycogen. Their more diminutive slow-twitch counterparts, which burn their fuel slowly, are crucial to delicate movements such as those involved in sewing or drawing, as well as for fine-tuning coarser, more powerful movements. Activities relying mainly on small slow-twitch fibers can proceed for long periods of time, while larger but more-fatigable fast-twitch fibers are reserved for brief bursts of high-powered activity.

Previous attempts to restore lost motor function using programmed sequences of electrical impulses, delivered via a cuff placed around a nerve, have enabled paralyzed people to walk, if only for a few minutes. Unfortunately, large nerve fibers are more responsive than smaller ones to electrical stimulation, so muscles contract in the wrong order - large, fast-twitch fibers first, then small, slow-twitch ones; this results in jerky motion and, soon thereafter, fatigue.

For the Nature Medicine study, lead author Michael Llewellyn, PhD, of Delp's lab, fashioned an "optical cuff" lined with tiny, inward-facing light-emitting diodes, which could be placed around the bioengineered animals' sciatic nerves. The LEDs emitted blue light at intensities high enough to penetrate deep into the nerve, ensuring that all of its constituent nerve fibers would receive adequate stimulation from brief impulses of light from the LEDs. The investigators then showed that optical stimulation reproduced the proper firing order of muscle fibers, inducing contractions similar to those that take place under normal conditions.

The approach is, for now, primarily a research tool, Delp said. But it holds promise for clinical applications in the longer term if a way can be found to safely introduce genes coding for light-sensitive nerve-cell-surface proteins into people, he said. Just as techniques now use electrical cuffs to get paraplegics to walk for a few minutes, optical cuffs could be inserted microsurgically at appropriate places along motor nerve bundles, so that computer algorithm-controlled light impulses could induce firing in different fibers at different times, mimicking natural physiology.

Delp and Deisseroth are conducting similar research with a different protein that, in response to light, inhibits nerve fibers instead of triggering impulses in them, in the hope of someday being able to control spasticity, as for example occurs in cerebral palsy.

In the recent years 'epigenetics' represents inheritable changes in gene expression that do not include DNA alterations.
Advertisement
Advertisement
This site uses cookies to deliver our services.By using our site, you acknowledge that you have read and understand our Cookie Policy, Privacy Policy, and our Terms of Use  Ok, Got it. Close
×