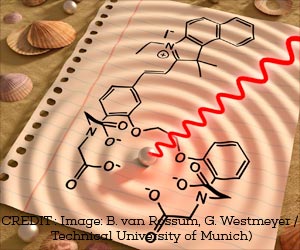 A new calcium visualizing sensor molecule has been developed with the help of a radiation-free imaging technique known as optoacoustics. The invention can help understand calcium concentration changes deep within living tissues. The findings of this study are published in Journal of American Chemical Society.

Calcium is an important messenger in the body. In nerve cells, for example, calcium ions determine whether signals are relayed to other nerve cells. And whether a muscle contracts or relaxes depends on the concentration of calcium in the muscle cells. This is also true of the most vital muscle in our body, the heart.

Advertisement
‘Calcium plays a very important role in regulating essential organs such as the heart and brain, optoacoustics can help observe these essential calcium concentration changes deep within living tissues’

"Because calcium plays such an important role in essential organs such as the heart and brain, it would be interesting to be able to observe how calcium concentrations change deep within living tissues and in this way to improve our understanding of disease processes. Our sensor molecule is a small first step in this direction," says Gil Gregor Westmeyer, head of the study and Professor of Molecular Imaging at TUM and Research Group Leader at Helmholtz Zentrum München.


In the study, which was published in in the Journal of the American Chemical Society, Professor Thorsten Bach of the TUM's Department of Chemistry was also involved. The researchers have already tested their molecule in the heart tissue and brains of living zebra fish larvae.
Advertisement
Calcium measurements also possible in deep tissue

The sensor can be measured using a relatively new, non-invasive imaging method known as opto acoustics, which makes it suitable for use in living animals and later possibly also in humans. The method is based on ultrasound technology, which is harmless for humans and uses no radiation.

Laser pulses heat up the photo absorbing sensor molecule in tissue. This causes the molecule to expand briefly, resulting in the generation of ultrasound signals. The signals are then sensed by ultrasound detectors and are translated into three-dimensional images.

As light passes through tissue, it is scattered. For this reason, images under a light microscope become blurred at depths of less than a millimeter. This highlights another advantage of optoacoustics: ultrasound undergoes very little scattering, producing sharp images even at depths of several centimeters.

This is particularly useful for examining the brain, because existing methods only penetrate a few millimeters below the brain surface. But the brain has such a complex three-dimensional structure with various functional areas that the surface only makes up a small part of it.

The researchers therefore aim to use the new sensor to measure calcium changes deep inside living tissue. They have already achieved results in the brains of zebra fish larvae.

Additionally, the scientists have designed the sensor molecule so that it is easily taken up by living cells. Moreover, it is harmless to tissues and works based on a color change: as soon as the sensor binds to calcium, its color changes which in turn changes the light-induced optoacoustic signal.

Many imaging methods for visualizing calcium changes that are currently available require genetically modified cells. They are programmed, for example, to fluoresce whenever the calcium concentration in the cell changes. The problem with this, of course, is that it is not possible to carry out such genetic interventions in humans.

The new sensor overcomes this limitation, the scientists say. In the future, the researchers plan to refine the properties of the molecule further, allowing the sensor signals to be measured in even deeper tissue layers. To this end, the team headed by Gil Gregor Westmeyer must generate further variants of the molecule that absorb light of a longer wavelength than cannot be perceived by the human eye.

Calcinosis
Calcinosis is a condition that manifests as calcium deposits in the skin and other tissues of the .....