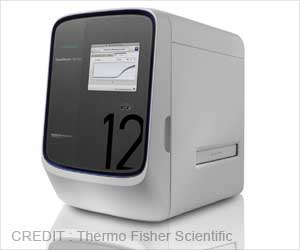 Some highly virulent pathogens may have a low prevalence rate and/or be restricted seasonally or geographically. However, the impact of transfusion-transmitted infection of such agents can have fatal consequences, particularly in highly vulnerable populations such as newborns, the elderly, or immuno compromised individuals.

The cost effectiveness of a multiple agent test means that more testing could be done, resulting in safer blood.


‘OpenArray device is designed in such a way to test multiple infectious agents at the same time in blood and plasma samples.’


All blood for transfusion must be tested for infectious agents. The increasing number of agents that may infect blood and the recognition that some of them only pose a risk in certain areas or certain times means that new methods to streamline blood testing must be developed.

The major feature of our OpenArray device tests multiple infectious agents at the same time, could be an answer to that need," explained Robert Duncan, PhD, an investigator with the Food and Drug Administration's Center for Biologics Evaluation and Research, Silver Spring, MD.

Many "singleplex" tests approved by the FDA are available to measure one specific pathogen. Less commonly available are "multiplex" systems that can detect multiple pathogens.

The individual tests use real-time PCR, which are spatially separated on the OpenArray device allowing a high level of multiplexing.

"New multiplex PCR-based diagnostic technologies aimed at faster and more accurate pathogen identification are increasingly used for detection of respiratory or gastrointestinal pathogens, yet testing for a multitude of pathogens directly in the blood is still at the research stage. This study demonstrated that new technologies can enable early and accurate detection of pathogens directly in blood samples.

The engagement and coordination of a number of stakeholders, including regulatory, clinical practitioner, and the diagnostics industry, are necessary for implementation of such disruptive technologies for patient care," added Elena Grigorenko, Eurofins Clinical Diagnostics Division at Huntsville, AL.

To design this device, the first step required choosing regions on each of the pathogen genomes to target and short pieces of DNA to accomplish that targeting. These short pieces, called primers and probes, which achieve the PCR, were loaded into the OpenArray device.

The next critical step was laboratory growth of the 30 pathogens and mixing each one of them with normal volunteers' whole blood or plasma to mimic the blood from an infected individual.

Once performance of the device was adjusted to maximum ability to detect these infectious agents in the mock clinical samples, it was tested with 92 donor samples obtained from a blood donor testing center with known pathogen content, as determined by FDA-licensed tests. Ninety-five percent of virus-positive samples were correctly identified.

"We need the next generation of superior performance tests that will detect an increasing number of transfusion-transmittable agents in multiplex format with high sensitivity and specificity, robustness, and adaptability to accomplish detection of new pathogens and maintain the safety of blood products," commented Dr. Duncan.

"Our goal in this research is to provide a proof of concept that will stimulate device developers to advance new technology for multiple assay testing devices into clinical use."

In support of this initiative, Phillip Williamson, PhD, VP of Operations and Scientific Affairs, said, "As the largest independent blood donor testing organization in the U.S., Creative Testing Solutions welcomes the opportunity to work with the FDA and others on new research initiatives and clinical trials that will ideally improve blood donor testing and the safety of the U.S. blood supply."

This OpenArray Platform is a research use only device and is not cleared or approved for clinical use.