Onset of Dementia Can Start As Early As 45: Study 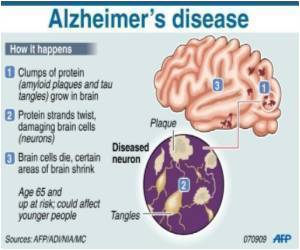 Memory loss and and other brain function can start decline as early as 45 years of age, much earlier than previously thought, according to a research published by the BMJ.

Previous research suggests that cognitive decline does not begin before the age of 60, but this view is not universally accepted.

Researchers, led by Archana Singh-Manoux from the Centre for Research in Epidemiology and Population Health in France and University College London in the UK, argue that "understanding cognitive ageing will be one of the challenges of this century," especially as life expectancy continues to rise.


They add that it is important to investigate the age at which cognitive decline begins because medical interventions are more likely to work when individuals first start to experience mental impairment.

Ageing is referred to the accumulation of changes that brings a person closer to death.
Advertisement
Therefore the authors observed 5,198 men and 2,192 women over a 10-year period from 1997. They were all civil servants aged between 45 and 70 and were part of the Whitehall II cohort study established in 1985.

Participants' cognitive functions were assessed three times over the study period. Individuals were tested for memory, vocabulary and aural and visual comprehension skills. The latter include recalling in writing as many words beginning with "S" (phonemic fluency) and as many animal names (semantic fluency) as possible.

The results show that cognitive scores declined in all categories (memory, reasoning, phonemic and semantic fluency) except vocabulary and there was faster decline in older people.

The authors argue that robust evidence showing cognitive decline before the age of 60 has important ramifications because it demonstrates the importance of promoting healthy lifestyles, particularly cardiovascular health, as there is emerging evidence that "what is good for our hearts is also good for our heads."

They add that targeting patients who suffer from one or more risk factors for heart disease (obesity, high blood pressure and high cholesterol levels) could not only protect their hearts but also safeguard them from dementia in later life.

In an accompanying editorial, Francine Grodstein, Associate Professor of Medicine at Brigham and Women's Hospital in Boston, says the study "has profound implications for prevention of dementia and public health."

A daily dose of vitamin B could greatly slow the onset of dementia and guard against Alzheimer's disease.
Advertisement
<< Exercise, But Moderately, To Ward Off Cold
New Glass Ceramic Better Suited For Dental Bridges >>

Onset of Dementia Can Start As Early As 45: Study Personalised Printable Document (PDF)