Only Half of School Adults Agree to Action Against Bullies 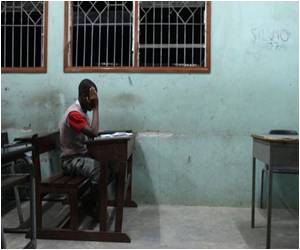 A new poll from the University of Michigan shows that only half of the adults in U.S. schools are in favor of action against bullies in schools.

On any given day in a state primary school in India, up to one in four teachers is missing from the school.
Advertisement


But only 56 percent said isolating a student socially should prompt school intervention.

"The key finding from this poll is that adults don't see behaviors across the bullying spectrum as equivalent," says Matthew M. Davis M.D., M.A.P.P., director of the C.S. Mott Children's Hospital National Poll on Children's Health.

17 Schools in Delhi to Get Potable Water Units

Chief Minister Sheila Dikshit said that seventeen Delhi government schools would get solar-powered water treatment plants to provide potable water to over 750 students daily in each institution.
Advertisement
"This is concerning because isolating a student socially is considered to be a form of bullying, and a dangerous one," says Davis, associate professor of pediatrics and internal medicine at the U-M Medical School and associate professor of public policy at the Gerald R. Ford School of Public Policy.

"Isolating a student socially may be linked to episodes of school violence and also teen suicide."

Since year 2000, 46 states have passed laws related to bullying and 45 of them require schools to have bullying policies. But not all states have the same definition of what constitutes bullying, and the poll indicates that adults don't agree on this either.

In the poll, nearly all adults (90 percent) say threatening another student's physical safety is bullying and 62 percent also say embarrassing or humiliating a student is definitely bullying.

But just 59 percent say spreading rumors about a student is bullying and only 48 percent say isolating a student socially should be considered bullying.

Since the shooting at Columbine High School in 1999, and with subsequent school shootings and teen suicides linked to bullying, public concern about bullying has grown considerably in the U.S. In the last several years of the Poll's 'Top 10' list of greatest child health concerns, bullying has been rated by the public as a major problem for kids. The latest national data from the Youth Risk Behavior Survey in 2011, reported by the national Centers for Disease Control and Prevention, indicate that 20% of high school students report that they have been the victims of bullying.

"As school starts, this is the perfect time of year to have conversations about how each school can find solutions to the problems of bullying and address this important childhood health problem," says Davis.

Most Schools in US are Not Prepared for Next Pandemic

Majority of the schools in US are not properly prepared for a pandemic, according to a study.
Advertisement
<< Learning Ability Faster in People With Neurodegenerative Di...
Ice in Arctic Region Shrinks to Its Smallest Amount Ever Re... >>

More News on:
Bullying at School - Tips For Schools

A-Z Drug Brands in India Noscaphene (Noscapine) Find a Hospital Nutam (400mg) (Piracetam) Sanatogen Indian Medical Journals The Essence of Yoga Daily Calorie Requirements Hearing Loss Calculator Sinopril (2mg) (Lacidipine)
This site uses cookies to deliver our services. By using our site, you acknowledge that you have read and understand our Cookie Policy, Privacy Policy, and our Terms of Use