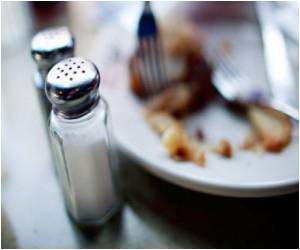 Only one in 10 Americans keep their salt intake within recommended levels, with the rest overstepping the limits and risking high blood pressure and heart ailments, a CDC report said.

The Atlanta, Georgia-based Centers for Disease Control and Prevention (CDC) found the average daily sodium intake of Americans was 3,466 milligrams, twice as much as recommended in health authorities' guidelines.

Americans in good health are advised to consume less than 2,300 milligrams of sodium per day, while people with high blood pressure, all middle-age and older adults and all African-Americans should limit their intake to 1,500 milligrams.

Processed or convenience foods require less time and energy for food preparation. Most of the processed foods are healthy with nutritional values.
Advertisement
It also determined that 77 percent of the salt eaten by Americans comes from processed and restaurant foods, especially pizza, breads and cookies that "may not even taste salty."

"Sodium has become so pervasive in our food supply that it's difficult for the vast majority of Americans to stay within recommended limits," said the study's lead author Janelle Peralez Gunn.

The study coincides with a Food and Drug Administration review of daily sodium guidelines, which experts recommend should be lower than they are.

It stealthily creeps in and catches people unawares. Find out more about this 'silent killer' by participating in the quiz.
Advertisement
<< Scientists Create Rat Lung in Lab
Vuvuzelas Can Spread Germs, Expert Warns >>

Morning breakfast is an important meal of the day, especially for Indians. Eating a healthy breakfast is a must as it keeps them active all day. So, try out these eight healthy Indian breakfast recipes and reap numerous health benefits for a healthy mind and body.
Advertisement
News A-Z
A B C D E F G H I J K L M N O P Q R S T U V W X Y Z
What's New on Medindia