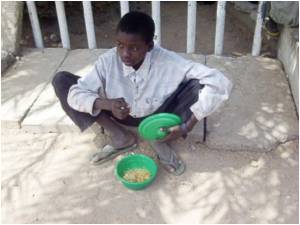 Freerice.com, an online game that has been developed can help increase one's knowledge while also providing rice to millions around the world.

The game, launched in 2007, challenges people to find the correct meaning of a word from four alternatives, and for every correct answer given 10 grains of rice are donated to countries such as Uganda and Bangladesh.
Advertisement

The site is the brainchild of computer programmer John Breen, who originally designed it to help his teenage sons prepare for their college entrance exams.


Breen realised the potential the site had to help others and he donated it to the World Food Programme (WFP).

Every time a person gets a correct answer the advertisement running at the bottom of the site changes and the advertiser pays for ten grains of rice.

The game has gained so much interest that it attracts 40,000 players everyday, and now the site is aiming to integrate with Facebook and Twitter.

Integrating the site with Facebook and Twitter is something hardcore players have been requesting for a long time, said Nancy Roman, director of communication for the World Food Programme.

"It's a stellar example of how a fun and simple idea can harness the Internet's potential to contribute to the world's most pressing global issue - hunger," she stated.

A mobile phone app will also be available for iPhone and iPad users, and the site is extending its challenges so that users can also test their knowledge of other subjects, such as art, geography, chemistry and maths.

Yoobot: An On-line Game to Take On Obesity
Welcome to Yoobotics - your virtual second life! And with an almost-impeccably accurate repeat of .....