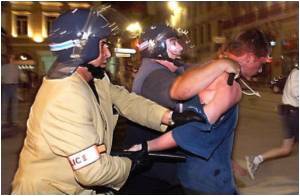 Tens of thousands of sex offenders, muggers, drug dealers and burglars will be allowed to vote in prison under controversial new rules.

Almost 30,000 prisoners, or one in three, will get the right after meddling Euro-crats trampled over British justice by insisting convicts get the vote.

After Elections, US Women Brace for Abortion Fight With New Lawmakers

After unexpected election results, US women's groups Thursday were bracing for a fight over abortion rights and gender equality with the new conservative majority in Congress.

Under the ruling, inmates will be registered to vote at their former addresses so that large jails do not become battlegrounds for votes. The first election inmates may vote in will be the European Parliament elections in 2014.


Ministers sparked anger last month by confirming that the 140-year ban on inmates taking part in parliamentary elections has been overturned by the European Court of Human Rights.

The ruling is limited to convicts serving terms shorter than four years, meaning that murderers, rapists, paedophiles and other serious offenders will not get the privilege.

The figures, which emerged only yesterday in answer to a written ministerial question by Labour MP Gavin Shuker, sparked outrage.

Labour's Shadow Justice Secretary Sadiq Khan said: "This is a slap in the face for victims of crime. We have already seen the Conservative-led Government break their promise on knife crime.

Dr David Green, of Civitas, said the Government's hand had been forced by the European Court of Human Rights but said ministers should have limited the privilege to inmates serving less than six months.

He added: "I think the Government has made a gross error in extending it to four years or less as these days criminals are given quite short sentences for terrible offences. They have gone far too far, too soon - and I hope it is not too late to change."

A Cabinet Office spokesperson, said: "Removing the blanket ban on prisoners voting is not a choice, but a legal obligation as a result of a court ruling. Failing to implement the ruling would put the Government in breach of international obligations and risk paying taxpayers' money in compensation."

"Pandemic" Swine Flu campaign of the WHO has been denounced as "one of the greatest medicine scandals of the Century."