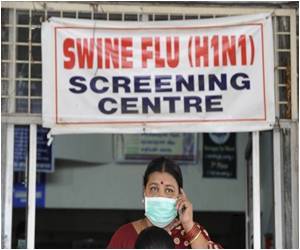 Swine flu triggered panic here on Saturday, claiming one more life, as the number of cases are feared to be escalating.

According to media reports, the government has issued an alert in the state following the death of two people.

The Chief Medical and Health Officer (CMHO) Dr. Pankaj Shukla, said the virus has claimed four lives in the past months and a three-month pregnant woman who tested positive, died on Friday.


"Since March-April four people have died in Madhya Pradesh due to swine flu including one each from Bhopal, Hoshangabad, Jabalpur and Gwalior. Recently we came across a case where the patient from Hoshangabad district tested positive and died in a hospital in Bhopal. The woman was pregnant," Shukla said.

Find out the risks for contracting swine flu and take the necessary precautionary steps. Swine flu caused a pandemic in 2009 with several deaths reported worldwide.
Advertisement
Shukla said the health officials have called for an emergency meeting to keep a check on the increasing number of swine flu cases.

"We have called for a meeting of task force, comprising of 15 hospitals, in charge of government hospitals, doctors of major nursing homes. The meeting will be presided under the guidance of the collector where professors and dean of medical colleges, superintendents have been invited. We will give them the swine flu update and how to go about its treatment and to avoid this disease," he added.

The H1N1 virus, better known as swine flu, created panic and fear worldwide in the year 2009. The virus is generally found in pigs but has the same symptoms as any seasonal flu.

Is the world in the grip of its first influenza pandemic in forty years? It definitely seems so! The current swine flu or pig flu disaster traces its origin to the badly- hit State of Mexico.
Advertisement
<< Carrots Link To Good Eyesight Is Not A Myth
Autopsy Centers in UP To be Upgraded and Modernized >>