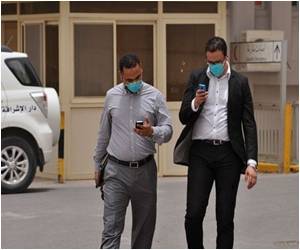 One more man has died in Jordan after being infected with the Middle East Respiratory Syndrome coronavirus, the kingdom's second fatality from the disease this year and the fourth since 2012.

The Middle East Respiratory Syndrome coronavirus is considered a deadlier but less-transmissible cousin of the SARS virus that erupted in Asia in 2003 and infected 8,273 people, nine percent of whom died.

Jordan reported the first death from MERS in February, after two fatalities in 2012.


"The new death from the coronavirus was one of those infected with the virus who was 56 years old who was suffering from anaemia and pneumonia, and who had been hospitalised," health ministry official Mohammad Abdallat was quoted as saying by state news agency Petra.
Advertisement
MERS emerged in 2012 and is mostly focused on Saudi Arabia, where it has killed 115 people, according to health officials there.

MERS Death Toll Reaches 115 in Saudi
The death toll from the MERS coronavirus has reached 115 since the respiratory disease first ......

American Officials Confirm First Case of MERS in the US
Health officials in the United States revealed that MERS, which first surfaced in the Middle East, ....