One in Three Japanese Women Desperate to be Housewives 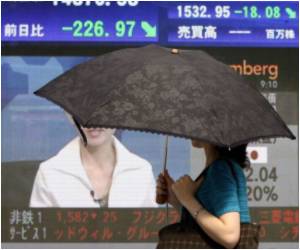 Despite growing calls for increased female participation in the workforce, one in three young Japanese women wants to get married and be a full-time housewife, a government survey has showed.

The poll, which quizzed more than 3,000 people aged 15-39, found 34 percent of unmarried women did not want to work when they settled down.

The survey, by the Health, Labour and Welfare Ministry, found that only a slightly higher proportion of women actively did not want to become dedicated home-makers (38 percent), while the rest had no firm opinion either way.


However, potential husbands were on the whole less keen on the idea, with only one in five saying they wanted a future wife to stay at home all day.
Advertisement
Despite high levels of education, many women in Japan drop out of the workforce when they have children, and social pressures to play the homemaker remain strong.

Experts at home and abroad, notably IMF director Christine Lagarde, have argued that women could rescue Japan's chronically underperforming economy if more of them went to work.

The nation's male-dominated, shrinking labour market is being hit by retiring babyboomers and a falling birthrate, which is putting extra pressure on the nation's finances as it tries to fund a growing pension pot from a shrinking pool of workers.

As part of an overhaul aimed at getting the economy moving again, Prime Minister Shinzo Abe has pledged to expand business opportunities for women.

Earlier this week his foreign minister told a United Nations forum that by 2020, 30 percent of senior government positions would be held by women. At present only two of the 19 members of the cabinet are women.

The survey, conducted on the Internet in late March and released this week, found younger women tended not to be looking for potential husbands who can bring home a huge pay cheque.

There was no breakdown in the poll detailing how many respondents did not want to get married in the first place.

Housewives, 'As Happy As Working Women': Officially Declared
Stay-at-home mothers are as content and satisfied with their lives as those who opt to go out to ......

Survey Finds Japanese Housewives' Secret Savings at 3-Year Low
A survey has found that the "secret savings" of Japanese housewives hit a three-year low in 2010 as ...