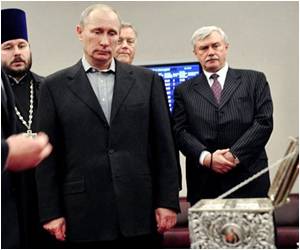 A new survey reveals that 20 percent of women are willing to marry 60-year-old Vladimir Putin.

Chefs reveal the eating secrets of the most powerful men and women on the planet.
Advertisement

The survey, for the independent Levada polling centre, surveyed nearly 2000 women across Russia.


During the 12 years he has run Russia, Putin has cultivated the image of a healthy, virile action-man, who often poses topless for cameras.