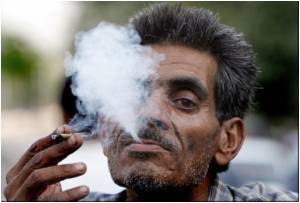 Older smokers lose cognitive function faster, it turns out. Their grey matter is damaged at a rate greater than what is the case with non-smokers according to a new study by researchers at The University of Western Australia.

Smoking causes deposition of fatty deposits in the blood vessels which is called atherosclerosis. Slowing of blood flow also occurs which in turn can lead to thrombus formation. This can result in stroke.
Advertisement

"One finding that is really important from a health point of view is that chronic smokers who quit during the study lost less brain cells and retained better intellectual function than those who continued to smoke. Over a two year period smokers who had discontinued smoking showed similar rates of memory decline to people who never smoked," Professor Almeida said.


Cognitive functions involve thought, memory and information processes enabling us to learn new things and comprehend what is being said.

"Older people who smoke should ask themselves if they are concerned about losing their memory.  If the answer is 'yes', then our results give them a very good reason to quit," Professor Almeida said.

Do you smoke cigarettes daily? Use medindia smoking risk calculator and calculate your reduced Life Span due to Smoking.
Advertisement
The study involved 332 community-living people who were 68 years old or over.  Chronic smokers were classified as consuming more than 5 cigarettes a day for the last 12 months.  The smokers completed a diary and all volunteers were given medical and cognitive function assessments at 6, 12 and 24 months after commencement.

Another breakthrough of the study was the development of a new technique that allows researchers to better assess brain changes over time.

The project was funded by the National Health and Medical Research Council of Australia and has been published in NeuroImage, A Journal of Brain Function.

The social costs of smoking are staggering. It could be up to $31 billion a year, says a report commissioned by the Cancer Council of Western Australia.
Advertisement
Advertisement