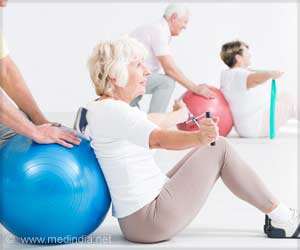 Exercising with people of their own age helps older adults stick with a group exercise programme, according to a new study published in the journal Health Psychology.

The findings also suggest that working out with peers of the same gender does not seem to make a difference -- it's the age that counts.

Advertisement
‘Older adults who worked out with people of their own age attended an average of 9.5 more classes than their counterparts in the mixed-age group.’

"This study points to the importance of age-targeting, but perhaps not gender-targeting, when developing these programmes," said lead author Mark Beauchamp, Professor at the University of British Columbia in Canada.


The researcher's prediction that same-gender classes would lead to even greater adherence wasn't borne out by the results.

"This is significant, as it could free facilitators from the cost of providing separate classes for each gender unnecessarily," the researchers said.
Advertisement
Elderly who worked out with people of their own age attended an average of 9.5 more classes than counterparts in the mixed-age group, the researchers found.

To strengthen participant's commitment, researchers also gave custom T-shirts to participants that identified them as members of a group and were given opportunities to socialise over coffee following class.

"All of this together points to the power of social connections," Beauchamp said.

"If you set the environment up so participants feel a sense of connection or belonging with these other people, then they're more likely to stick with it," Beauchamp added.

According to the researchers, older adults worldwide are less active than they should be and that can increase the risk of cardiovascular disease, obesity and arthritis.

The researchers noted that social strategies would be easy to employ in a variety of physical activity settings such as community centres, fitness clubs and retirement communities.

Why Daily Muscle Stretching Exercise Is Important for Elderly People
Muscle stretching exercises carried out on a regular basis can improve the flexibility of muscles .....

Is Exercise Good for Heart?
Regular exercise and physical activity can make the heart younger and increase new heart cell ......

Can Your Physical and Mental Exercise Improve Your Childs Learning Ability?
The more active you are physically and mentally the smarter could be the children you beget. This .....