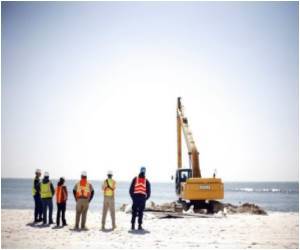 Scientists are still measuring the horrific impact of the Deepwater Horizon explosion of last year.

About eight percent, or about one of every 13 barrels of the spilled oil that reached the ocean surface, eventually made its way into airborne organic particles - particles small enough to be inhaled into human lungs.

Urbanization is not bad altogether. Undertaking the correct approaches during urban planning can avoid most of the environmental problems associated with it.
Advertisement

Some of those particles likely reached the Gulf coast when the winds were blowing toward the shore, according to the study conducted by the National Oceanic and Atmospheric Administration (NOAA).


The Deepwater oil rig erupted in flames off the Louisiana coast when a concrete sealant failed and oil moved up piping from the ocean floor, about a mile beneath the surface of the water. The disaster claimed the lives of 11 workers and critically injured four more.
Advertisement
But environmental impact has been huge. Now it has been determined that the amount of air pollutants in the atmospheric plume generated by the oil spill was similar to what happens in a large city.

"The levels of ozone were similar to what occurs in large urban areas. During the oil spill, it was like having a large city's worth of pollution appear out in the middle of the Gulf of Mexico," said Daniel M. Murphy, a co-author of the study

"We could see the sooty black clouds from the burning oil, but there's more to this than meets the eye. Our instruments detected a much more massive atmospheric plume of almost invisible small organic particles and pollutant gases downwind of the oil spill site," said Ann M. Middlebrook, scientist at NOAA ESRL's Chemical Sciences Division (CSD) and lead author of the study.

According to the study, over the course of the spill, the total mass of organic particles formed from evaporating surface oil was about ten times bigger than the mass of soot from all the controlled burns. Controlled burns are used to reduce the size of surface oil slicks and minimize impacts of oil on sensitive shoreline ecosystems and marine life.

The organic particles formed in the atmosphere from hydrocarbons that were released as surface oil evaporated, and they got bigger as they traveled in the plume.  The atmospheric plume was about 30 kilometers wide- about 18.5 miles - when it reached the coast.

The authors note that their findings could help air quality managers anticipate the effects of future oil spills. The depth of the Deepwater Horizon spill, about a mile beneath the surface, limited the effects on air quality because some hydrocarbons, such as benzene, largely dissolved in the water.

"It was fortunate that the effects on air quality of the Deepwater Horizon oil spill were limited in scope," said Middlebrook. "Our findings show that an oil spill closer to populated areas, or in shallower waters, could have a larger effect."

The findings of the study have been published in a special issue of Proceedings of the National Academy of Sciences.