Obsession With Bodybuilding can Lead to Bigorexia 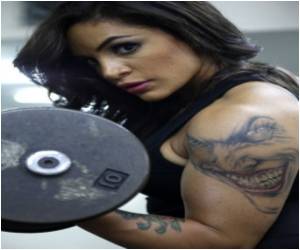 Many men who are unhappy with their bodies are resorting to unsafe dietary and exercise habits and risking suffering from 'bigorexia' disorder or muscle dysmorphia, warns expert.

Dr Stuart Murray, an expert on muscle dysmorphia, has revealed that around 1 percent of the UK population has the illness or symptoms of it.


Murray said that when he looked at the data over the last 30 years, he found that the number of men dissatisfied with their body had tripled.

Murray added that there's data suggesting men would be prepared to sacrifice years off their life for bigger biceps.

Bulging Popularity of Muscle Building in China
Gaggles of Chinese bodybuilders preened and performed press-ups backstage before competing for one ....

Most Common Exercise Myths Busted
Sweating it out in the gym by doing those painful sit-ups for a six-pack? Well, it may not work ......

Teen Invites Netizens Watch Him Commit Suicide Before a Live Webcam
Abraham K. Biggs, 19,a Florida resident had invited netizens on a bodybuilding forum to watch him .....

Exercise may Help Treat Anxiety and Depression
A new study suggests that exercise can provide a slight benefit in treating patients suffering from ...