Obese Mothers may Pass on Infertility to Offspring 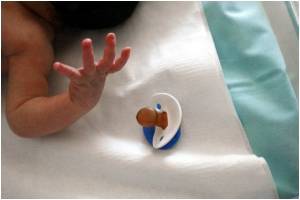 A new research published in the journal Endocrinology has warned that if an expectant mother is suffering from obesity, then the chances of infertility in the next generation increased.

According to researchers from the Yale University School of Medicine, women who are obese have low levels of hormone ghrelin, which has been known to regulate reproductive function in both humans and animals.

The researchers tested their theory among mice and found that the children of those mothers that had low levels of ghrelin were less fertile than their counterparts who were born of mothers with normal levels of the hormone.


Lead researcher Hugh Taylor said that while the study was conducted among mice, their theory should also be applicable to humans. "Our results suggest that low ghrelin levels could program the development of the uterus in the female children of obese women. These women may then be less fertile as adults", he added.

Infertility is a condition wherein couples fail to achieve pregnancy or if the woman has been unable to carry a pregnancy that results in a live birth.
Advertisement
<< Overweight People Think They are Slimmer Than They Actually...
Even Mild Stress Affects Health Adversely >>

Loram (2 mg) (Lorazepam) How to Reduce School Bag Weight - Simple Tips Accident and Trauma Care Color Blindness Calculator Drug Side Effects Calculator Sanatogen Drug Interaction Checker Iron Intake Calculator The Essence of Yoga Calculate Ideal Weight for Infants
This site uses cookies to deliver our services.By using our site, you acknowledge that you have read and understand our Cookie Policy, Privacy Policy, and our Terms of Use  Ok, Got it. Close
×