Obese Dad Shed Loads of Weight to Get Proper Sleep 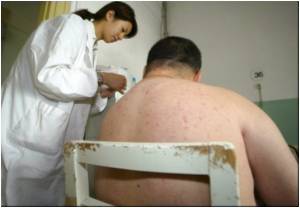 47-year-old Seamus Saunders faced an acute problem due to his weight. He was unable to get more than 45 minutes of shut eye every night as then folds of fat around his neck choked him awake each night.

The problem became so acute that Seamus struggled to function during the day and consequently lost his job. Doctors told Seamus, who weighed 24st 13lbs that he had to trim his fat if he was to sleep properly.

Seamus had a gastric band surgery in 2006, but it snapped forcing him to go for a gastric bypass surgery. The surgery was a success and the tubby man lost 13st and is now at a manageable 11st 10lbs.


"I can't believe how lucky I am. If you can't sleep, you can't live. I didn't sleep for six years. It wrecked my life," Seamus told The Sun. "I got let go from my job. I couldn't concentrate and wasn't a reliable timekeeper."

Seamus also developed diabetes along the way. But now following the surgery, he can sleep properly and more importantly his diabetes is under control.

Low calorie meals or diet include foods that are high on nutritional content and yet have fewer calories. Updated information about low calorie diet or low calorie foods and its health benefits.
Advertisement
<< California Declares Whooping Cough Epidemic in State
Volunteer Group Does a Himalayan Task of Removing Rubbish f... >>

Sanatogen Drug Side Effects Calculator Blood - Sugar Chart Find a Doctor A-Z Drug Brands in India Indian Medical Journals Color Blindness Calculator Noscaphene (Noscapine) Calculate Ideal Weight for Infants Daily Calorie Requirements
This site uses cookies to deliver our services. By using our site, you acknowledge that you have read and understand our Cookie Policy, Privacy Policy, and our Terms of Use