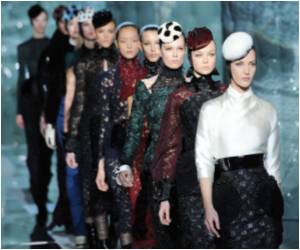 Singapore-born Gurung -- whose creations have been worn by Kate Middleton, Michelle Obama and Oprah Winfrey -- went to extremes to "preserve an elegant woman who is more and more rare."

Gurung's dresses and skirts fell mid-calf, some elegantly off-shoulder, in pastel pink, lavender, canary yellow, green or bold prints. Lips were bright pink and tangerine while hair was slicked back.


Describing his collection as "femininity with a bite" the designer -- who launched his eponymous brand in 2009 -- said he pushed into the future using unusual fabric choices.
Advertisement
He used laminated silk and lace and mixed tweed with plastic. One "raincoat" was blended with tulle and silk while another was just clear black-painted plastic paired with green crop pants and a printed T-shirt.

Gurung told AFP his collection was "an ode to all the women I love and women in general."

He said he was inspired by actress Marilyn Monroe from Bert Stern's "The Last Sitting" photoshoot -- published in Vogue six weeks before she died -- and wanted to recreate "that melancholic feel."

Shift dresses, babydoll dresses, cropped tops and high-waisted skirts were the order of the day in a simple monochromatic palette "with a touch of indigo."

There was a lot of peek-a-boo with dresses that had triangular cutouts, transparent bits or completely see-through.

Abstract dots and embroidery provided the only distraction from the basic colors, and she also used tweed, tulle, chiffon and decorated some dresses with organza flowers.

"The inspiration is rock stars' girlfriends on holiday and what they are wearing," Stuart said after the show, adding that these were rock chicks of another era, and that she had been inspired by the feel of the south of France in the 1970s.

She threw in an edgy mix of black leather and organza to show what this type of girl would wear when she headed back to the city.

"I wanted to be more casual, more streetwear."

Stuart, who counts stars Angelina Jolie, Madonna, Jennifer Aniston and Paris Hilton among her devotees, said essential items for next spring would be a babydoll dress and a little something in black leather.

French luxury sportswear brand Lacoste meanwhile goes back to its sporty heritage for spring-summer 2014, and designer Felipe Oliveira Baptista used sharp lines and geometry to create a collection "reminiscent of modernist architecture: all lightness and transparence."

Large wire cubes on the runway set the angular tone and the outfits came in muted colors, with a lot of transparency and movement.

"I was very interested, nearly obsessed with the idea of lightness, not only in the material but also in the spirit, for something very desirable, very sensual," said Baptista.

"There is a lot of transparency but it remains modest. I like this idea of sensuality."

Highly-anticipated designers such as Alexander Wang and Altazurra were also due to unveil their collections Saturday.

Celebrities, fashionistas and industry heavyweights have flocked to New York for seven days of fashion frenzy in the Big Apple, which runs until September 12 before the spotlight swings over to London, Milan and Paris.

More Than Half of Fashion Industry Workers Not Satisfied With Their Jobs
A new study has found that more than half of workers in the industry are dissatisfied with their ......

British Vogue Says Fashion Shoots Not Real
The British Vogue has come out with a film through which it hopes to reveal the truth behind ......

Fashion World Takes Over New York
As industry heavyweights and several newcomers unveil their lines for next spring, the fashion ......