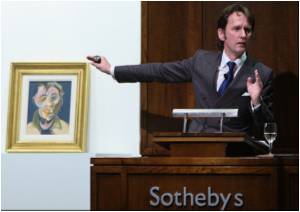 Two leading auction houses in New York combined for the art world's richest sales week ever, with works getting auctioned for more than a billion dollars.

Christie's reaped in more than $638 million dollars at its blockbuster contemporary art auction on Wednesday.

Its staggering haul included a record $58.4 million for a Jackson Pollock drip painting, which shattered all previous records for the highest price for any work at an art auction.


"We are thrilled to announce an unprecedented overall total of $638.6 million for this week's Post-War and Contemporary Art sale series," said Brett Gorvy, an official at Christie's.
Advertisement
Sotheby's, meanwhile, had stellar overall sales of $377.4 million, including the sale of the work "Domplatz, Mailand" (Cathedral Square, Milan) by German painter Gerhard Richter for $37.1 million -- a record for a living artist.

The other sensation for Sotheby's was a work by US painter Barnet Newman, one of the leading figures of abstract expressionism, whose "Onement VI" fetched $43.84 million -- the most ever for one of his paintings.

Gorvy said the record prices "reflect a new era in the art market, wherein seasoned collectors and new bidders compete at the highest level within a global market."

Pollock's "Number 19, 1948," executed in his iconic drip-paint style with a shimmering mixture of silver, black, white, red and green, had been expected to sell for between $25 million and $35 million.

But it shot up to set a new auction high for the artist. The previous top auction price for a Pollock had been $40.4 million last year, although his paintings are said to have sold for far more in unconfirmed private deals.

It was the highest auction price ever for the young artist, who died in 1988 of a heroin overdose in New York, aged just 27.

Source: AFP
Advertisement
<< It's All About The Music For Gay Eurovision Fans
Patients With Stroke Fare Better in Get With The Guidelines... >>

New York Auction Puts Up Rare Beatles' Guitar For Sale
A well-heeled Beatles fan may cry with happiness with this guitar, though he may not quite gently .....