Nuns Urged To The Take Pills To Avoid Cancer Risk 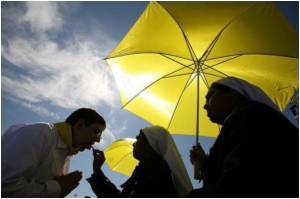 The two doctors have suggested that the Catholic nuns must be given contraceptive pills to cut the extra cancer risk linked with chastity.

Interesting information about the use of birth control pills, a debate about the birth control responsibility of men and women and development of hypothetical male contraceptive pill.
Advertisement

Dr Kara Britt and Professor Roger Short said that the Pill would protect nuns from the 'accursed pest' of cancer, which has been recognised for 300 years, reports the Independent.


Like other women who do not have children, nuns are at an increased risk of dying from breast, ovarian or uterine cancers.

Studies show that women who have taken the contraceptive pill at anytime in their lives - the effect lasts for at least 20 years - have a 50-60 per cent reduced risk of ovarian and uterine cancer.

The report was published in the medical journal The Lancet.

Breast cancer is one of the leading causes of cancer deaths among women. It is often said that a woman who breast-feeds is at a lower risk of developing cancer compared to another who does not .Are these mere old wives tales or is there some truth in it? This quiz on breast cancer has all the details.
Advertisement
<< How Different are the Brains of the Victims of Autism Spect...
Drinking Tart Cherry Juice Improves Sleep Efficiency >>

Indian Medical Journals Calculate Ideal Weight for Infants Drug Interaction Checker Selfie Addiction Calculator Find a Hospital Pregnancy Confirmation Calculator How to Reduce School Bag Weight - Simple Tips Sanatogen Diaphragmatic Hernia Accident and Trauma Care
This site uses cookies to deliver our services. By using our site, you acknowledge that you have read and understand our Cookie Policy, Privacy Policy, and our Terms of Use