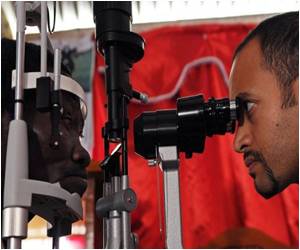 Can parents use smart phones and digital cameras to potentially screen their kids for the most common form of pediatric eye cancer?

Baylor University and Harvard Medical School researchers believe so. In their study, published online this week in PLOS One, the researchers discovered, through the use of amateur digital photography, evidence of leukocoria or "white eye," the cardinal symptom of retinoblastoma, which can be seen in photographs during the earliest stages of the disease.

Their findings potentially pave the way for a new diagnostic tool that enables earlier diagnosis and treatment. Retinoblastoma, mostly occurring in children from birth to 5-years-old, is an aggressive eye cancer that, if not treated in time, can be fatal if it spreads to the brain. Although children in the United States who are treated for retinoblastoma have a 95 percent survival rate that figure drops below 50 percent for children in developing countries. However, surviving retinoblastoma is just the first hurdle.


Typically, "survivors experience moderate to severe vision loss" and in some cases loss of both eyes, but early detection and treatment can increase the chances of survival and vision preservation.
Advertisement
Historically, children with retinoblastoma exhibit persistent leukocoria in photographs. Despite this link, digital photography has not been intentionally used by doctors to screen for retinoblastoma because "white eye" is assumed to be a symptom of advanced retinoblastoma, not early stage retinoblastomaa paradigm dispelled by the Baylor-Harvard study.

"Diagnosing retinoblastoma continues to be a major challenge. One of the most effective methods for detecting it appears to be amateur photography," said Bryan F. Shaw, Ph.D., assistant professor of chemistry and biochemistry in Baylor's College of Arts & Sciences and lead study author. "In a majority of retinoblastoma cases, it is the parents that initiate the diagnosis based on seeing leukocoria or 'white eye' in photos of their children." That was the case for Shaw and his wife, Elizabeth, a stay-at-home mother, who first noticed their son Noah's "white eye" in family photographs.

It was Noah's battle with retinoblastoma that inspired Bryan Shaw to begin to try and make digital photography a deliberate tool in retinoblastoma screening. "Newborns and infants don't typically get checked out by an ophthalmologist, but many of them do get their retinas scanned multiple times a week, when mom or dad are snapping pictures to share on Facebook," Shaw said. As part of the study, researchers analyzed more than 7,000 recreational photographs or "baby pictures" of nine retinoblastoma patients and 19 children without the disease. After analyzing his son's pictures and quantifying the daily occurrence of leukocoria, Shaw was able to determine that "white eye" is not necessarily a symptom of advanced retinoblastoma, but that leukocoria can be a symptom of retinoblastoma in its earliest stages, for example, at 12 days old as in Noah's case.

Shaw also found "that the intensity of the "white eye" was different in each of his son's eyes and that the saturation, or measurement of color concentration, was lower in the eye with the larger tumors." These findings suggest that a digital camera can not only alert parents that their child might have retinoblastoma, but it can also inform a doctor of its severity. "From our work, we were able to create the first quantitative scale of leukocoria by which to evaluate the intensity of retinoblastoma-linked leukocoria," Shaw said.

"We were able to determine that the frequency of leukocoria can correlate with the clinical severity of retinoblastoma. Leukocoria can emerge in low frequency in early-stage retinoblastoma and increase in frequency during disease progression and decrease during disease remission." These results suggest that leukocoria is often occurring in young children long before parents may notice it on their own because it initially occurs infrequently as the tumors are small in size and number. That discovery confirmed the hypothesis proposed by Shaw and study co-author Shizuo Mukai, M.D., associate professor of ophthalmology at Harvard Medical School and a pediatric retina specialist at Massachusetts Eye and Ear.

Mukai, who successfully treated Noah's cancer by surgically removing his tumors, specializes in pediatric retinal diseases and intraocular tumors. "Although leukocoria is the most common presenting sign of retinoblastoma occurring in 50 percent of new patients, it is usually not detected by the parents or the pediatrician until the tumor is of significant size," Dr. Mukai said. Their research is a pivotal step in laying the groundwork for creating software "to alert unsuspecting parents to the emergence of recurrent leukocoria," Shaw said. In developing countries, where most deaths occur, speeding up diagnoses could save lives.

"In Namibia or India, for example, a parent's access to digital photography is probably going to continue to increase at a faster rate than their access to monthly pediatric eye exams," Shaw said. "If we can create software that can detect leukocoria and alert a parent when it begins to occur persistently, then I believe digital photography can eradicate metastatic retinoblastoma from this world and prevent most of the deaths that occur."

Source: Eurekalert
Advertisement
<< Origins of Syphilis Continue to Remain Unknown
Many People Use Social Media to Track Down Their First Love >>

Parents' Ignorance Spells Doom for Children With Eye Cancer in India
Many parents in India who are ignorant of eye cancer don't start timely treatment for a killer form ...

Diagnostic Delays in Eye Cancer Among Minority and Uninsured Children Worsens Outlook
Children from racial and ethnic minority families who do not have private health insurance have to ....

10,000 Indians Diagnosed With Eye Cancer Each Year, Say Experts
Every year, an estimated 10,000 new cases of eye cancer are diagnosed in the country, say experts. ....

Retinoblastoma
Retinoblastoma is a type of cancer of the eye occurring in children. Early diagnosis and treatment, ...