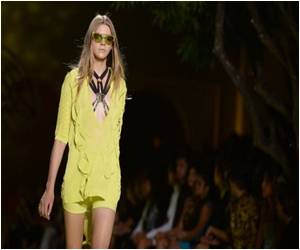 A Los Angeles fashion label has launched it's first ever scented t-shirts that will smell good even after washing several times.

The LA based clothing label, Hiro Clark and the New York based perfume maker, Perfumery Le Labo have collaborated to bring a limited edition of t-shirts named 'Smells Like You' that have been infused with signature scent.
Advertisement

Fabrice Penot, co-founder of LeLabo explained that they came with this idea as t-shirts were something that lovers stole from each other, to have their partners fragrance in it.


The company has made these tees available in white and grey color choices with two graphics: one, a woodcut design and second, saying "there miracles here".

This cotton scented t-shirts launched in the label's spring/summer 2015 collection available on their website costs one upto 128 dollars.

Source: ANI
Advertisement
<< Sleeping Too Much or Too Less can Actually Kill You, Reveals...
Increase in the Number of Rhinos in Assam's Kaziranga: Fores... >>

Rising Popularity of Virtual Tombstones, Tattoo Tributes and Mourning T-Shirts
A Baylor University researcher says that people are resorting to unconventional ways to honor the .....

T-Shirts Now Can Charge Mobile Phones
Method to utilise a cheap T-shirt to store electrical power, which could be a breakthrough for ......

Cotton T-Shirts may Soon Generate Electric Power
You could soon be charging your mobile phone through your shirt....