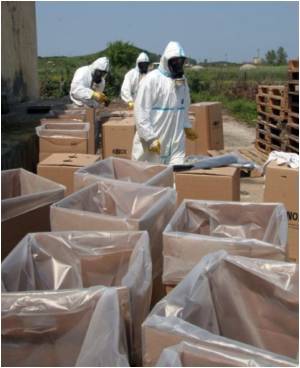 Nearly 80,000 industrial chemicals are employed and about 700 new chemicals make an entry into the market each year in the United States.

According to the U.S. Government Accountability Office. To assess human health risks from exposure to harmful substances, James Englehardt, professor in the College of Engineering at the University of Miami, is proposing a new technique that is more efficient than current methods.The new model reduces the data requirements 21-fold from previous models, and can predict the likelihood of illness not just from exposure to individual substances, but also from chemical mixtures. The findings are published online in advance of print, by the journal of Risk Analysis."The method we are proposing could be applied, for example, to drinking water containing chemical byproducts of chlorine disinfection; well water contaminated with chemicals spilled or released to the subsurface; polluted indoor or outdoor air; or food contaminated with pesticides or other chemicals," says Englehardt, principal investigator of this project.In general, chemical contaminants do not occur individually, but rather in mixtures, and components of the mixtures can act to increase, or reduce the health effects of other mixture components, explained Englehardt. "Previously, no generally-accepted dose-response function was known for mixtures," Englehardt says. "I therefore derived a dose-response model that theoretically can be extrapolated from high dose data to low doses of interest, for mixtures of carcinogens and non-carcinogens."


The researchers then developed a Bayesian mathematical technique to allow their model to accept various types of input information and produce a risk estimate that is rigorously more conservative the less information is available for the assessment. "More generally, I hope to motivate others to study and apply the predictive Bayesian approach to dose-response assessment, which I strongly believe in as a basis for management of ever-progressing chemical technology and for microbial dose-response assessment as well."The paper is titled "A Gradient Markov Chain Monte Carlo Algorithm for Computing Multivariate Maximum Likelihood Estimates and Posterior Distributions: Mixture Dose-Response Assessment." Co-authors are Ruochen Li, financial systems analyst, at the Hang Seng Bank, Shanghai, China and Xiaoguang Li, postdoctoral associate, at Fudan University, Shanghai, China. Englehardt is now overseeing work on a method to detect risk in drinking water in real time, directly from sensor data. That work is part of a current project, sponsored by the National Science Foundation, to build an autonomous net-zero water residence hall on the University of Miami campus. All wastewater from the residence hall will be converted to drinking water, for return to the residence hall in a closed loop process. During the research, student residents will not drink or cook with the water, but will use it for all other purposes.

Link Between Chemicals and Breast Cancer Risk is Unproven So Far

Plants could be holding in them at least 500 medically useful chemicals yet to be discovered, according to a new analysis by a New York Botanical Garden scientist.
Advertisement