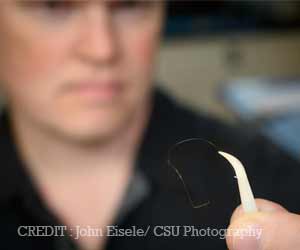 Newly developed technique using a microwire sensor can help detect viral infections effectively, reports a new study. The findings of the study are published in the journal Biosensors and Bioelectronics.

A team of Colorado State University researchers has developed technology that can detect extremely small amounts of antibodies in a person's blood. Antibodies develop to infect cells or kill pathogens, essentially fighting off a bacteria or virus. The levels of antibodies in the blood can tell whether that person is sick.

Advertisement
‘Newly developed technique can help detect viral infections effectively. Using a small wire that is one-fourth the size of a human hair, scientists have developed a sensor that can detect as few as 10 antibody molecules within 20 minutes.’

Using a small wire that is one-fourth the size of a human hair, the researchers developed a sensor that can detect as few as 10 antibody molecules within 20 minutes. Standard medical testing requires billions or trillions of antibody molecules for detection and can take up to a day to process.


This type of cost-effective instrument could help clinicians treat diseases sooner in people and could be used in low-resource settings.

Results from the team's research will be published in Biosensors and Bioelectronics. The study, "An ultra-sensitive capacitive microwire sensor for pathogen-specific serum antibody responses," is published in advance online.
Advertisement
The Limitations of Standard Medical Testing

Currently, most U.S. medical offices and hospitals use the ELISA test to determine whether or not a person has a viral infection. ELISA stands for enzyme-linked immunosorbent assay.

It's a common test, but ELISA's sensitivity is relatively low, said Brian Geiss, a senior author on the study and an associate professor in the Department of Microbiology, Immunology, and Pathology. This means that clinicians need a fairly high number of antibodies in a person's blood to get a positive test result. It also often takes seven to 10 days after an infection for the test to register.

Down to the Wire

Using what Geiss described as very simple technology, the research team chemically attached proteins related to Zika and chikungunya viruses to inexpensive small gold wires. These particular viruses, along with West Nile and dengue, are transmitted by infected mosquitoes. Medical laboratories use these proteins in ELISA tests to look for antibodies that have developed to fight infections.

Next, they ran an electrical current through the wire, creating a charge on the wire similar to that of a battery.

The research builds off work from the lab of Professor Chuck Henry in the Department of Chemistry. Henry, a co-author on the paper, and his lab have developed several simple, inexpensive electrochemical devices over the last 10 years.

Professor David Dandy, also a senior author on the paper and head of the Department of Chemical and Biological Engineering, said he was surprised about the device's sensitivity.

"We found that we could get very high specificity for confirming a viral infection," Dandy said. In addition, the research team did not see any reaction or reactivity from antibodies targeting other viruses, which can sometimes lead to false positive test results.

The scientists each brought unique skill sets and expertise to the table for this project, which led to the group's success.

"This type of research project is something that none of us could do on our own," said Geiss, adding, "we synergized our efforts to come up with new solutions to problems we're hoping will eventually be used in clinical settings."

The research team now hopes to combine this discovery with viral detection research they previously published to create a single system that can detect both viruses and antibodies against the viruses in patient samples.

This type of device could also be used in agricultural settings for livestock disease surveillance and environmental sensing.

Lei Wang, who recently received a doctorate from CSU through the School of Biomedical Engineering and is now a postdoctoral fellow at the Massachusetts Institute of Technology, is the lead author of the study.

Jessica Filer, who recently received a doctorate from CSU through the Cell and Molecular Biology program, and Meghan Lorenz, an undergraduate research assistant, also are co-authors of the study.

Monkeypox
Monkeypox infection is a zoonotic viral infection that usually lasts for 3 weeks. It is caused by th...