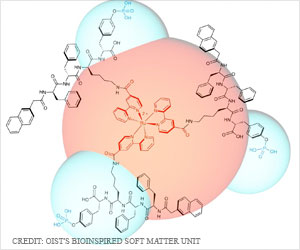 A new technique that target the membranes of cervical cancer cells to block their migration was recently found by a research team from the Okinawa Institute of Science and Technology Graduate University (OIST).

The research published in Chem can provide new options for cancer treatment.


The ability of cancer cells to change position within body tissues through cell migration and invasion represents the biggest threat of cancer to human health.


‘New technique synthesizes molecule that can target the membranes of cervical cancer cells to block their migration.’


Traditionally, scientists have tried to approach the problem of cancer migration by targeting molecules inside cancer cells, but finding an appropriate target has proved challenging.

Lipid rafts are free-floating domains within the cell membrane that act as platforms for communication between the outside and inside of a cell. They are associated with the cell cytoskeleton -- a complex network of interlinking filaments inside the cell that is necessary for cell migration -- making them viable targets for inhibiting migration.

Dr. Guanying Li and Professor Zhang worked with colleagues from OIST's Imaging and Instrument Analysis Section, as well as scientists in the SM Application Group of JEOL in Tokyo.

The team designed and synthesized a luminescent molecule that recognizes cervical cancer cells and physically stops them from migrating. The molecule consists of a ruthenium metal complex core with three self-assembly peptide building blocks attached in a three-dimensional structure.

When these building blocks interact with a cervical cancer biomarker known as glycosylphosphatidylinositol-anchored placental alkaline phosphatase, or GPI-anchored PLAP, which is located on lipid rafts, they self-assemble into nano-scale chains, or 'nanofibrils', that glue lipid rafts into large clusters. Consequently, the associated cytoskeleton components get tied up, pinning the cancer cell on the substrate and preventing it from moving at that site.

In response, the cancer cell tries to migrate away from the immobilized site, extending projections called filopodia in the new direction of migration. Lipid rafts cluster on the filopodia tips, becoming the new sites of molecule self-assembly, that results in the pinning of the cancer cell at a second site.

This process continues as the cancer cell tries to migrate away from these immobilized regions. Progressively, the cancer cell expands its body in an attempt to escape immobilization, but the cell margins remain fixed by the nanofibrils, its body is stretched flat. The opposing stretch forces cause the cell to rupture, which leads to cell death.

Professor Zhang's team were able to visualize the pinning, stretching and rupturing of cervical cancer cells by immunostaining different parts of the cells and viewing them under a confocal fluorescent microscope and a high-resolution scanning electron microscope (SEM).

"Our research opens a window in cervical cancer therapy," says Professor Zhang. "We have shown that our molecule works on cancer cells in the lab, but the next step is to see if it works on real tumors in animals. As different cancers express different biomarkers, it might be possible to modify the molecular structure of the ruthenium molecule to target different types of cancer cell."