Scientists in Britain have developed a novel pill that would provide natural heart-protecting benefits of a Mediterranean diet.

Ateronon is believed to be the world's first compound to provide the natural heart-protecting antioxidant properties of the Mediterranean diet in a form that can be reliably absorbed by the human body.


Doctors from Cambridge University in England and Harvard medical school in America have initiated trials to investigate the properties of the treatment.


"We know the Mediterranean diet is beneficial in terms of lowering blood pressure and cholesterol levels, and the key element is tomatoes," the Telegraph quoted Ian Wilkinson, a British Heart Foundation-funded senior lecturer in clinical pharmacology at Cambridge University, as saying.

"We are hoping to build on that evidence and show that getting the whole food into people in higher concentrations might be more effective than just trying to give people one type of vitamin, or one type of dietary supplement," he added.

The key component of Ateronon is lycopene, which is derived from tomatoes, and promotes good cardiovascular health.

To date, it has been impossible to convert large lycopene crystals into smaller molecules more easily absorbed by humans.

Ateronon combines lycopene with a lactose-based milk protein, thus reducing the size of lycopene molecules and making them easier to absorb.

Lycopene is a powerful antioxidant that blocks the breakdown of fats in the blood, and leads to the release of cholesterol and low-density lipoproteins, which form fatty deposits on artery walls.

During the study, half of the patients will be given a dummy placebo pill for half of the trial period to ensure any identified Ateronon benefit can genuinely be attributed to the treatment itself. 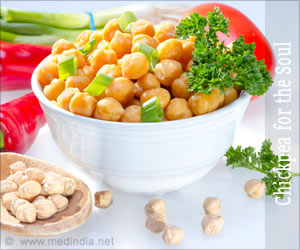 Chickpea for the Soul!
A healthy staple food, Hummus is one bean dip that will contribute to your evening snacks and main course with complete satisfaction. Includes recipe for the dip.
READ MORE