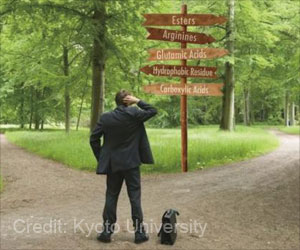 Designing compounds to interact with disease-related proteins is the main aim of drug discovery. Recent studies find that the development process may increasingly depend on the 'big data'; and complex 'deep learning', that would require supercomputing power.

However, this process could be made much more simple, by requiring less time and cost.

Now a team of scientists has done just that, developing a method using simple models and small data sets -- but still achieving a high degree of predictive ability. The researchers from Kyoto University, MIT, and ETH Zurich reported their findings 6 March in the journal Future Medicinal Chemistry.


The study demonstrates that large amounts of data generated by testing compound activity on protein groups -- known for roles in cancer and other physiological processes -- could be reduced to a small fraction of the total, which could still accurately explain the full set. The subset required was less than a quarter in most cases, and in some, even less than 10%.

Scientists discover new method to successfully synthesize drug analogues in an economical and eco-friendly way.
Advertisement
The authors examined 13 aspects of the new method to test its usefulness.

"We tried to intentionally break our system in multiple ways. Not only did it show resilience, but many of the analyses yielded views that supported each other," says corresponding author JB Brown of Kyoto University. "After the analyses and repeated testing for reproducibility, it became apparent to us that this could become a platform for molecule design."

The authors began with publicly available compound and protein activity data, and taught a computer program how to make decisions based on available information by using a collection of 'decision trees'. Hospital doctors, for example, use decision trees to arrive at diagnoses based on patient answers to general questions.

Brown and his team gave the program some basic experience, and then showed that it could be sufficiently predictive when working on additional cases.

"There is nothing wrong with acquiring huge amounts of data and having it available as a reference. However, the extra data's utility in predicting the relationship between drugs and proteins is questionable," explains Brown, emphasizing that the new method could lead to a reduction in drug development costs.

"Drug discovery can fall into a trap of trying tens or hundreds of thousands of compounds against proteins, with 1% or less success rates," continues Brown, emphasizing that the new technique can reduce the number of initial tests to a few thousand, from which point scientists can check just the most promising ones.

"Not only are the financial implications large, but decision trees let us ask and understand the key science question: why?," says Brown. The team is now evaluating the technology in practical applications for pharmaceutical, medical, and agricultural research.

The toughness of skin varied significantly in relation to its water content. Dry skin was found to be brittle and easier to break than hydrated skin.
Advertisement
<< Multiple Sclerosis Drug: FDA Approves Ocrelizumab For Treatm...
When You Need A Break, Even Placebos Work >>

A new molecular pathway in the brain may help to identify drug therapies to prevent dementia, reveals study.

Accident and Trauma Care Turmeric Powder - Health Benefits, Uses & Side Effects Diaphragmatic Hernia Iron Intake Calculator Drug Side Effects Calculator Color Blindness Calculator Drug Interaction Checker The Essence of Yoga Post-Nasal Drip Pregnancy Confirmation Calculator
This site uses cookies to deliver our services.By using our site, you acknowledge that you have read and understand our Cookie Policy, Privacy Policy, and our Terms of Use  Ok, Got it. Close
×