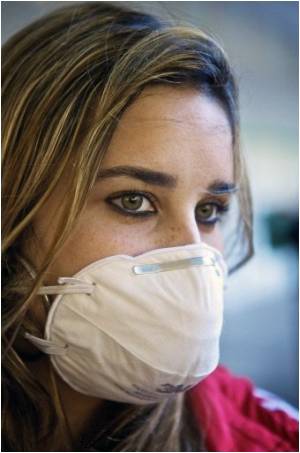 Are your friends more popular than you ? This "friendship paradox" may give us a clue about the spread of infectious disease.

Nicholas Christakis, professor of medicine, medical sociology and sociology at Harvard University, and James Fowler, professor of medical genetics and political science at the University of California, San Diego, used the paradox to study the 2009 flu epidemic among 744 students. The findings, the researchers say, point to a novel method for early detection of contagious outbreaks.

The regular use of alcohol-based disinfecting hand gels authorities recommended during the A(H1N1) pandemic has little effect on the disease's infection rate, according to a study published Sunday.
Advertisement

Analyzing a social network and monitoring the health of its central members is an ideal way to predict an outbreak. But such detailed information simply doesn't exist for most social groups, and producing it is time-consuming and expensive.


The "friendship paradox," first described in 1991, potentially offers an easy way around this. Simply put, the paradox states that, statistically, the friends of any given individual are likely more popular than the individual herself. Take a random group of people, ask each of them to name one friend, and on average the named friends will rank higher in the social web than the ones who named them.

Personalized Reminders Help Seniors Get Their Flu Shots on Time

Personalized reminders in the form of post cards or phone calls is found to help seniors get their annual flu shots on time.
Advertisement
If this is hard to fathom, imagine a large cocktail party with a host holding court in the center while, at the fringes, a few loners lean against the walls staring at their drinks. Randomly ask the party-goers to each name a friend, and the results will undoubtedly weigh heavily in the direction of the well-connected host. Few people will name a recluse.

And just as they come across gossip, trends and good ideas sooner, the people at the center of a social network are exposed to diseases earlier than those at the margins.

As the 2009 influenza season approached, Christakis and Fowler decided to put these basic features of a social network to work, contacting 319 Harvard undergraduates who in turn named a total of 425 friends. Monitoring the two groups both through self-reporting and data from Harvard University Health Services, the researchers found that, on average, the friends group manifested the flu roughly two weeks prior to the random group using one method of detection, and a full 46 days prior to the epidemic peak using another method.

"We think this may have significant implications for public health," said Christakis. "Public health officials often track epidemics by following random samples of people or monitoring people after they get sick. But that approach only provides a snapshot of what's currently happening. By simply asking members of the random group to name friends, and then tracking and comparing both groups, we can predict epidemics before they strike the population at large. This would allow an earlier, more vigorous, and more effective response."

"If you want a crystal ball for finding out which parts of the country are going to get the flu first, then this may be the most effective method we have now," said Fowler. "Currently used methods are based on statistics that lag the real world - or, at best, are contemporaneous with it. We show a way you can get ahead of an epidemic of flu, or potentially anything else that spreads in networks."

Indeed, the authors note that the same method could be used very widely - to anticipate epidemics of behaviors like drug use or even the diffusion of ideas or fashions.

John Glasser, a mathematical epidemiologist at the Centers for Disease Control in Atlanta, GA, who was not involved in this research, said: "Christakis' and Fowler's provocative study should cause infectious disease epidemiologists and public health practitioners alike to consider the social contexts within which pathogens are transmitted. This study may be unique in demonstrating that social position affects one's risk of acquiring disease. Consequently, epidemiologists and social scientists are modeling networks to evaluate novel disease surveillance and infection control strategies."