New research studies whether current triglyceride-level guidelines are apt for people aged 80 and older. The findings of the study are published in the Journal of American Geriatrics Society.

Experts know that in adults younger than 65, having high cholesterol levels in your blood can raise your risk for heart attacks and strokes. However, in adults 80 years old and older, researchers have not until now thoroughly studied high cholesterol's impact on heart disease, your ability to function well, or your risk for death.


In fact, some research shows that a higher level of total cholesterol and a lower level of so-called "bad" cholesterol (also known as "low-density lipoprotein" or LDL cholesterol) might be helpful in protecting your ability to perform daily activities and preserving your life for longer.


‘Elderly people who have a higher triglyceride concentration level is linked to a lower risk of cognitive decline, frailty aggravation, and mortality.’
Read More..


What's more, it appears that having low cholesterol is linked to a higher risk of death from cancer, respiratory disease, and accidents in adults aged 80 and older. It also appears that the benefits of taking medications known as statins, which lower cholesterol, may lessen as people age. Researchers even have a phrase for this phenomenon. They call it the "risk factor paradox." This describes the fact that for adults aged 80 and older, having some conditions that are considered health risks in younger adults predicts better survival. These conditions include having higher total cholesterol, higher blood pressure, and higher body mass index (BMI, a ratio of body weight to height that helps determine whether you are overweight or obese).

A team of researchers in China decided to learn more about whether current triglyceride-level guidelines make sense for people aged 80 and older. To do so, the team explored links between triglyceride levels and the ability to perform daily self-care activities, cognitive function (the ability to think and make decisions), and frailty (a condition associated with aging that increases the risks of poor health, falls, disability, and death. Signs of frailty include weakness, weight loss, and low activity levels.). Researchers also looked at whether triglyceride levels had an impact on death in a group of 930 Chinese adults aged 80 or older.

The researchers learned that for the oldest people in the study, having a higher triglyceride level was linked to a lower risk of cognitive decline, less of a reduction in the ability to perform daily tasks, less frailty, and lower risk for death. 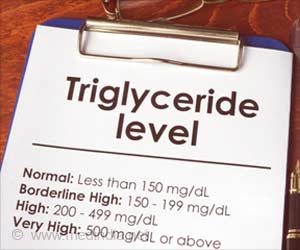 High Triglyceride Levels Due To Mutated Genes can be Altered by Diet
Gene mutations can predispose the body to increase triglyceride levels but maintaining a normal body mass index and a healthy diet can reverse the risk.
READ MORE