Patients with oropharyngeal squamous cell carcinoma who had "matted" lymph nodes - nodes that are connected together - had a 69 percent survival rate over three years, compared to 94 percent for patients without matted nodes, according to a study published online ahead of print publication in Head & Neck.


The oropharynx is an area that includes the back of the tongue, soft palate, throat and tonsils.


"The spread of cancer throughout the body accounts for about 45 percent of the deaths from oropharyngeal carcinoma," says the study's senior author, Douglas B. Chepeha, M.D., M.S.P.H., an associate professor of otolaryngology head and neck surgery at the U-M Medical School. "Our findings may help doctors identify patients who are at higher risk for having their cancer metastasize and who would benefit from additional systemic therapy. Conversely, some patients without matted nodes may benefit from a reduction of the current standard treatment, which would cut down on uncomfortable side effects."

Notably, the findings indicate an increased risk independent of other established prognostic factors, such as the patient's history of smoking or whether they have the Human papillomavirus (HPV), the study found. Smoking (tobacco and marijuana), heavy alcohol use and HPV infection have each been linked to the development of oropharyngeal squamous cell carcinoma.

"It's not clear why we're finding these survival differences for patients who have matted nodes," says study lead author Matthew E. Spector, M.D., a head and neck surgery resident at U-M who won a national award from the American Head and Neck Society for this work. "It is possible that there are biological and molecular differences in these types of tumors, which can be explored in future research."

The results affirm the value of having a team of doctors and researchers from different specialties - radiology, oncology, biostatistics and surgery - working together to find advances that can directly benefit patients, Chepeha says. "This was a collaborative effort and all of the authors made important contributions," he adds.

The study tracked 78 cancer patients who were part of a clinical trial evaluating two cancer drugs in combination with intensity-modulated radiation therapy. All the patients had stage III or IV squamous cell carcinoma of the oropharynx and had not had any previous treatment. Sixteen of the 78 patients had matted nodes.

"It's significant that we've identified this new marker that can help us predict which patients have worse survival odds," Chepeha says. "Now we need to go one step further and figure out what mechanisms are at work and how we can use this knowledge to improve survival rates." 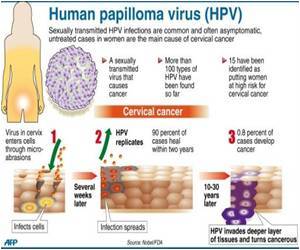 Combination HPV Diagnostic Test for Head and Neck Cancer Appears Most Accurate
Researchers have determined that a combination of P16 immunohistochemistry and DNA qPCR to test for viral E6 can accurately determine the oropharyngeal squamous cell carcinoma, a form of head and neck cancer.
READ MORE

Pharyngeal Cancer / Throat Cancer
Pharyngeal cancer, commonly referred to as throat cancer, is a form of malignant tumor that can affect the pharynx, the part that connects the nose to the food pipe.
READ MORE

Strep Throat
Strep Throat is a bacterial infection caused by Group A beta hemolytic streptococci. It affects most commonly infants and elderly people but adults and older children can also be affected.
READ MORE