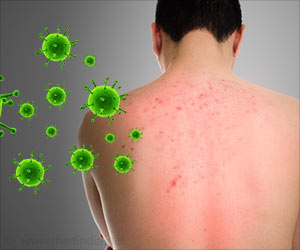 The role of another potential culprit in the cellular and genetic pathways that contributes to the formation of psoriasis lesions is unmasked by the findings at Fujita Health University, Japan, published in the journal Scientific Reports.

Learn what causes psoriasis, the appropriate diet to follow and the importance of diet in the treatment of this medical condition.
Advertisement
‘Neutrophils and NETs are found to be involved in the cellular mechanisms of psoriasis, resulting in inflammation and lesions. The finding allowed exploring the role of a drug  Cl-amidine in alleviating the disease. ’


Although the exact pathology is not clear, the mechanism was further explored by the study team. Role of neutrophils - a type of white blood cell was found to be involved in psoriasis.

Psoriasis, a chronic autoimmune skin disease has phases of exaggeration and remission. Homeopathic remedies are used to treat psoriasis and prevent its recurrence.
Advertisement
The cells have pro-inflammatory effects as they burst open and release their contents at the site of infection, thereby forming "neutrophil extracellular traps" (NETs) - a web of proteins and genetic information from its nucleus and induce inflammation.

The activation of NETs in psoriasis is performed by a precursor signaling protein called IL-36 cytokines. The mutation in the Il36rn gene causes a deficiency of the IL-36 receptor antagonist (IL-36Ra) protein, thereby allowing the IL-36 to induce uncontrolled inflammation.

This results in the proliferation of epidermal cells and increased neutrophil count in psoriasis-like lesions in the mutant mice, in a condition known as DITRA.

The observation was proven by using imiquimod, a drug known to stimulate IL-36 signaling and subsequent immunological response, to induce psoriasis in two groups of mice: one healthy (wild type) and another with the Il36rn gene mutation.

The mutant mice also had higher neutrophil counts and NET concentrations than the wild type, and thus mRNA levels of target cytokines were also examined.

Use of a drug that specifically targets and inhibits PAD4an enzyme responsible for the formation of NETs - Cl-amidine, significantly reduced the levels of inflammatory cells and IL-36 signalling proteins. This resulted in a decrease of psoriasis lesions just after three days of treatment.

Psoriasis is a non-contagious, non-fatal disease but it can adversely affect one's overall quality of life including trouble with daily activities and social interactions. Take this quiz to find out more about this skin disease.