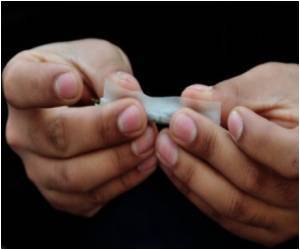 The needle-free delivery system allows administration of the medication, which cannot be given by mouth and can have side effects when injected.

Yogeshvar Kalia and colleagues explain that the medication consists of fibroblast growth factors (FGFs), proteins that have shown promise for treating skin conditions and PAD, which causes pain in the legs, buttocks, and feet due to blocked arteries in the legs.


However, FGFs become inactive if given by mouth, and their injection can result in kidney and eye damage.

The scientists had previously shown that a drug delivery technology called transdermal iontophoresis could deliver medicines made from small proteins.

But the question was would the technique, which involves encouraging medicine through the skin with a small electric current, work for larger proteins like FGFs.

Their laboratory tests with samples of human skin and pig skin showed that iontophoresis did work - in contrast, no FGF was delivered without electricity.

The study was reported in the ACS journal, Molecular Pharmaceutics.