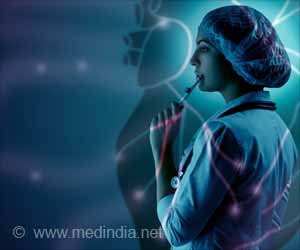 New 3D printing technique is developed with promising biomedical uses such as the engineering of artificial arteries and organ tissues that imitate real ones. The findings could lead to better, more personalized therapies for those suffering from high blood pressure and other vascular diseases. The findings of the study are published in the journal Nature Communications.

The study outlines a layer-by-layer printing method that features fine-grain, programmable control over rigidity, allowing researchers to mimic the complex geometry of blood vessels that are highly structured and yet must remain pliable.

"The idea was to add independent mechanical properties to 3D structures that can mimic the body's natural tissue," said Xiaobo Yin, an associate professor in CU Boulder's Department of Mechanical Engineering and the senior author of the study. "This technology allows us to create microstructures that can be customized for disease models."


Hardened blood vessels are associated with cardiovascular disease, but engineering a solution for viable artery and tissue replacement has historically proven challenging.

To overcome these hurdles, the researchers found a unique way to take advantage of oxygen's role in setting the final form of a 3D-printed structure.

"Oxygen is usually a bad thing in that it causes incomplete curing," said Yonghui Ding, a postdoctoral researcher in Mechanical Engineering and the lead author of the study. "Here, we utilize a layer that allows a fixed rate of oxygen permeation."

By keeping tight control over oxygen migration and its subsequent light exposure, Ding said, the researchers have the freedom to control which areas of an object are solidified to be harder or softer all while keeping the overall geometry the same.

"This is a profound development, and an encouraging first step toward our goal of creating structures that function as a healthy cell should function," Ding said.

As a demonstration, the researchers printed three versions of a simple structure: a top beam supported by two rods. The structures were identical in shape, size, and materials, but had been printed with three variations in rod rigidity: soft/soft, hard/soft and hard/hard. The harder rods supported the top beam while the softer rods allowed it to fully or partially collapse.

The researchers repeated the feat with a small Chinese warrior figure, printing it so that the outer layers remained hard while the interior remained soft, leaving the warrior with a tough exterior and a tender heart, so to speak.

The tabletop-sized printer is currently capable of working with biomaterials down to a size of 10 microns, or about one-tenth the width of a human hair. The researchers are optimistic that future studies will help improve the capabilities even further.

"The challenge is to create an even finer scale for the chemical reactions," said Yin. "But we see tremendous opportunity ahead for this technology and the potential for artificial tissue fabrication."

3D Printing Restores Burnt Nose of Teenager
The burnt nose of a teenager is restored using 3D printing technique, which is a boon for burn victims and people looking for nose jobs.
READ MORE 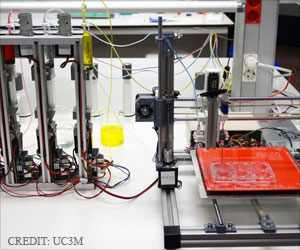