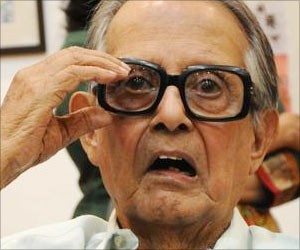 Noted cartoonist R.K. Laxman, 94, is said to be in a critical condition after his health deteriorated suddenly on Sunday evening.

He was admitted to the Deenanath Mangeshkar Hospital in Pune last Saturday. The veteran cartoonist was suffering from a urinary infection and had a multi-organ failure, said sources at the hospital.

According to the doctors, Mr. Laxman was on ventilator support and in an unconscious state. Mr. Laxman had undergone dialysis treatment on Saturday as his kidneys had failed, sources added.


"On Friday evening, he developed some complications and his home support staff rushed him to Medipoint hospital in Pune. Doctors confirmed he has had a multiple organ failure. Last night he was moved to the ICU at Deenanath Mangeshkar hospital where he is on life support. Doctors said he is responding to treatment," said a close relative of Mr. Laxman.

The cartoonist had suffered from a series of strokes in 2010 that affected the right side of his body, severely impeding his speech. However, he continued to keep a punishing schedule, resuming sketching of his iconic Common Man cartoon.