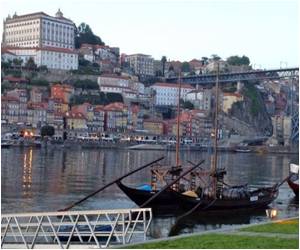 A yellowed portrait hangs over the bar in the Cova Funda restaurant: Antonio de Oliveira Salazar, the dictator who gripped Portugal in his fist for half a century.

Forty years after the April 25 revolution that swept away the remainder of his regime, "Salazar salt cod" is on the menu here in his home town of Santa Comba Dao.

Cash-strapped Portugal still plans to sell 85 paintings by Spanish master Joan Miro, in spite of the cancellation of the London auction at the last minute this week because of a legal dispute.
Advertisement

Many still nurse the wounds of torture by his regime -- but the locals at the bar here, like many others fed up with Portugal's economic crisis, remember him fondly.


"We would need 100 Salazars to sort this country out," said Manuel Campos, 59, a regular at the Cova Funda. "He was a dictator, but he was not Hitler or Mussolini."

Portugal Dispute Leads To Cancellation Of The Micro Art Sale

The London sale of 85 paintings by Spanish master Joan Miro, which is valued at around 36 million euros has been cancelled over a legal dispute in Portugal
Advertisement
Commemorations of the 1974 "Carnation Revolution" on its 40th anniversary on Friday are tainted by lingering wounds stinging more sharply in the recent economic crisis.

"Since the start of the crisis, we have seen the values of the revolution being simply destroyed," said one of the surviving coup leaders, Vasco Lourenco.

For the third year in a row, he and other veterans of the coup are boycotting Friday's official celebrations in protest.

"The welfare state, healthcare, education, pensions -- all these social achievements are threatened today by the austerity policies," added the former captain, a big man of 71 with greying temples.

The coup on April 25, 1974, was led by soldiers in tanks, joined by a popular resistance movement.

It toppled a dictatorship that lasted from 1926 under Salazar and from 1968 under Caetano. The country's new leaders withdrew Portugal from its African colonies.

The bloodless uprising became known as the Carnation Revolution after red spring flowers were placed in the muzzles of the soldiers' rifles.

Portugal flourished after the revolution, joining the European Union in 1986, but high debts caught up with it.

In 2011 it had to be bailed out by international creditors, who obliged it to make tough spending cuts and other austerity measures.

"In the crisis, the number of people nostalgic for the dictatorship has risen, in Santa Comba Dao and elsewhere in Portugal," said Alberto Andrade, 57, an anti-fascist activist in the town.

A recent study by Lisbon University concluded that 19 percent of Portuguese believe the dictatorship had more good sides than bad -- two points higher than a decade ago.

In the southern town of Evora, Aurora Rodrigues, 62, still has nightmares about being tortured by the secret police for protesting against the regime.

At the age of 21 she was deprived of sleep for two weeks straight and today cannot put her head under water, remembering the simulated drownings she suffered in 1973.

"No pacification is possible until the torturers are brought to account," she told AFP.

Now a magistrate, she kept silent about her torture for 36 years until a psychiatrist treating her for recurring nightmares persuaded her to write a book about it.

"The mood after the revolution discouraged political prisoners from speaking out," resulting in a "whitewash" of the crimes by Salazar's ideological police, the PIDE, she said.

Irene Pimentel, a historian, estimates that the PIDE killed nearly 50 political dissidents in Portugal, not including victims who died in the colonies.

She says 2,755 people linked to the PIDE have been tried and more than two thirds of them received jail terms shorter than six months.

He later testified in court against his torturer, who was released for lack of evidence.

"The revolution was not tough enough in that respect, but they had to make concessions," to avoid a civil war, he said.

Salazar's grave lies covered in flowers in a cemetery in Santa Comba Dao.

Three days after the anniversary of the revolution, crowds of supporters will come to mark his birthday at his tomb, which is surrounded by messages left by supporters.

"You will live eternally in the hearts of millions of Portuguese," reads one.

For the first time in Portugal, traces of horse DNA in meat products were detected in a pre-cooked lasagne made by Nestle and sold exclusively to hotels and restaurants known as Horeca.
Advertisement
<< Brew Your Own Beer from Concentrate at Home
JAMA Mammography Patient Anxiety Study: Comments from ACR, ... >>

Find a Doctor The Essence of Yoga Daily Calorie Requirements Calculate Ideal Weight for Infants Blood Pressure Calculator Turmeric Powder - Health Benefits, Uses & Side Effects Drug Interaction Checker Pregnancy Confirmation Calculator A-Z Drug Brands in India Iron Intake Calculator
This site uses cookies to deliver our services. By using our site, you acknowledge that you have read and understand our Cookie Policy, Privacy Policy, and our Terms of Use