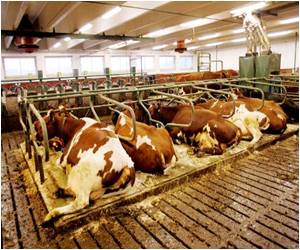 Norwegian authorities confirmed an "atypical" case of mad cow disease but said that it posed no threat to public health.

Unlike the classic form of bovine spongiform encephalopathy (BSE) -- transmitted through the now banned practice of feeding cows with meat-based feed -- which caused an epidemic in Britain in the 1990s, isolated cases of "atypical" BSE can appear in old livestock.

The Norwegian Veterinary Institute has detected a probable case of mad cow disease with a second positive test for bovine spongiform encephalopathy (BSE) on a 15-year-old cow.
Advertisement

"The discovery of an atypical case of BSE has no implications for food security in Norway and there is no question of withdrawing products or putting other measures in place," Kristina Landsverk, a spokeswoman at the Norwegian Food Safety Authority, said in a statement.


"There is no risk in consuming beef or drinking milk."

The case -- discovered on a farm in central Norway -- was the first to be detected in the Nordic country but similar isolated cases have been reported in other countries including Switzerland and Brazil in recent years.

A new test can reduce the risk of transfer of variant Creutzfeld Jakob Disease (vCJD), or Mad Cow disease, through blood transfusions among humans.
Advertisement
Only the classic form of BSE is known to have been transmitted to people, according to Norwegian authorities.

As a precaution, the cow's carcass was destroyed along with four other animals coming from the same herd.

Last week Norway alerted that it had detected a "probable" case of mad cow disease after two tests produced positive results. The atypical diagnosis was confirmed by a British laboratory.

Authorities have confirmed that Brazil is probing a suspected case of atypical mad cow disease detected in the country.
Advertisement
Advertisement
This site uses cookies to deliver our services.By using our site, you acknowledge that you have read and understand our Cookie Policy, Privacy Policy, and our Terms of Use  Ok, Got it. Close
×