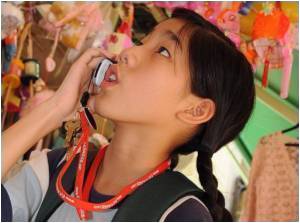 In sharp contrast to the rest of the world, North Korea is far behind in the use of technology with cell phones being barred and the Internet made inaccessible.

The communist country is one of the world's most tightly-controlled societies and bans unauthorised mobile phones as part of a crackdown on information from outside the country.

Your friends and neighbours may play a bigger role than your family, when it comes to your physical and mental health, says a new study.
Advertisement

Visitors landing at Pyongyang's airport find there is no cellular phone signal. But it does not matter because polite and efficient customs officials confiscate foreigners' phones and put them in a green cloth bag.


They are returned when the visitor leaves.

Laptops are allowed after a customs check to ensure they do not carry a mobile communication device.

North Korea is clamping down on mobile phones and long distance telephone calls to prevent the spread of news about a worsening food crisis, the United Nations investigator on human
Advertisement
While foreigners are left incommunicado at the terminal, North Koreans chat on their own mobiles.

The country in December 2008 introduced a 3G network in a joint venture with Cairo-based Orascom Telecom.

Chosun Sinbo, a pro-North Korean newspaper published in Tokyo, reported in April that there were only 120,000 mobile subscribers in North Korea, a country of 24 million people.

Tour guides and officials are among those with mobiles although, unusually for Pyongyang, two girls were also seen intently focused on their handsets as they sat in a park.

Anywhere else in Asia the scene would have been routine but it was a rare sight in the run-down capital which seems stuck in a time decades past.

The regime is expanding its wireless network to accommodate about 600,000 subscribers before the end of this year, the Chosun Sinbo paper said.

Mobiles used in Pyongyang are made in neighbouring China.

Tour guides said the poverty-stricken country has a "local" Internet service and they thought that an outside link to the real Internet existed, perhaps at a library or university.

The Yanggakdo International Hotel, one of two "deluxe" hotels catering to foreigners in the capital, has a telephone kiosk in the lobby.

International calls are crystal clear and a computer in the corner offers email, the clerk says.

"But no Internet," she adds.

While the world's high-tech revolution has passed the country by, visitors assume it is up-to-date in one area: surveillance.

In an elevator of the Yanggakdo, one loud foreigner was cautioned by another who expressed concern about listening devices.

North Koreans are bombarded with propaganda from childhood, leaving them in ignorance of the wider world. One tour guide had never heard of the late pop star Michael Jackson.

The tuning controls of radios and televisions are fixed to official stations.

In Pyongyang, an evening of local television likely involves a movie about North Korea's past wars.

The BBC, Japan's NHK, CCTV from China, and a Russian channel are, however, available in rooms at the Yanggakdo.

Several rights groups in South Korea have contacts who relay news via Chinese cellphones with pre-paid cards, but these work only in border areas.

In March, the Seoul-based rights organisation Free North Korea Radio said it had given three satellite phones to "correspondents" in the North to try to break down the country's wall of secrecy.

Life expectancy in North Korea has declined over the past 15 years, with an increase in infant mortality and more mothers dying in childbirth, according to census figures seen Monday.
Advertisement
<< Incidence of Cerebral Palsy Remains Constant in India
Wales' Chief Medical Officer Asks People to be Ready for Wi... >>