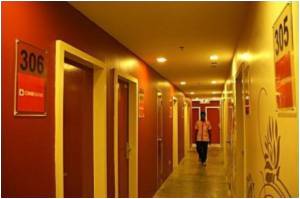 Within three years North Korea hopes to complete an ambitious but long-delayed hotel under construction in Pyongyang for 25 years, said a travel firm after it was given rare access to the site.

Kim Jong-Il Treated by North Korean Medics Trained in US

North Korean doctors, who treated former leader Kim Jong-Il after his stroke in 2008 were sent to the United States for training, said a South Korean doctor on Thursday.
Advertisement

But the project has been repeatedly delayed and for many stands as a symbol of the persistent economic problems plaguing the country, a Stalinist state with a barely functioning economy that has suffered from famines in recent years.


Beijing-based company Koryo Tours, which organises trips to North Korea, was granted a rare glimpse of the hotel last week.

During the visit, manager Hannah Barraclough and a colleague were told that North Korean authorities "say it will be two or three more years before the building is complete".

Observers have revealed that even while North Korea prepares a lavish funeral for late leader Kim Jong-Il, outside the capital people are struggling to survive
Advertisement
Photos taken by Koryo Tours and provided to AFP reveal a vast but still unfinished concrete interior.

"The atrium, when you walk into the hotel, is covered in glass and full of light," said Barraclough, adding that the glass cladding covering the hotel is nearly completed.

The hotel boasts a ninety-fifth floor viewing platform offering "an amazing panoramic view over Pyongyang" and it will house a massive banquet hall as well as offices and apartments, she said.

Barraclough added that the hotel is likely to remain closed to tourists until its interior is finished.

North Korea has one of the world's most rigidly-controlled economies and is desperately poor following decades of mismanagement and isolation, as well as the imposition of international sanctions over its nuclear programme.

North Korea watchers and media reports in South Korea say Kim Jong-Un, who took over as leader after his father's death in December, has shown signs of promoting market reforms in a bid to stimulate the economy.

Late North Korean leader Kim Jong-Il savoured an elaborate personality cult at home but he was also a preferred time-tested source of laughter by Western popular media.
Advertisement
<< Western Kenya Home to New and Potentially Dangerous Malaria...
Infants Growing Up in Bilingual Houses can Differentiate Be... >>